TWO Britons have been jailed following a protest at an illegal quarry.

Vittorio Miotto and Alex Brimmell were given an 18-month suspended sentence after they were found guilty of criminal damage and assault.

The charges, which both men claim “fictitious,” relate to a protest at the Ismael quarry close to the Granada town of Órgiva on January 20, 2004, when 30 worried residents attempted to block access to the works site.

Claiming the quarry “illegal and detrimental to the environment,” the peaceful demonstration had the backing of the Junta de Andalucía regional government, whose then environment chief confirmed work at the quarry was about to be stopped at the time of the arrests.

Although the quarry enjoyed the backing of the region’s Supreme Court, it was functioning on public land.

During the demonstration, quarry owner Manuel Alabarce alleges he was attacked by members of the protest group and heavy machinery damaged.

Police were called and both Miotto, 44 and Brimmell, 47, were arrested.

Speaking to the Olive Press before sentencing, olive farmer Miotto said: “We feel we have been found guilty of protecting the environment.

“This is our home and we care about where we live. Had this project gone ahead the lives of many local residents would have been blighted by dust, noise and continuous heavy traffic. The area in which they live would have been turned into an industrial zone.

“We feel we have been worked over by the system.”

The two men deny causing any damage to the quarry owner, insisting his injuries “invented.”

Alabarce had to be treated for cuts to his lip and hand at the medical centre in nearby Órgiva.

“We are not violent people. The protest was passing peacefully until the police arrived and started lashing out,” Miotto, 44, added.

Eyewitnesses have confirmed Miotto was subjected to a physical arrest by members of the Guardia Civil.

The two men allege they were singled out as they are co-organisers of festival DragonFest, an annual party that attracts thousands of visitors from around Spain and Europe.

The festival was banned by the former mayor of Órgiva, Adolfo Martín, as “it brought dangerous elements came to the area,” he said.

Author Chris Stewart, who lives close to the site of the quarry, slammed the decision to jail the pair.

“I hope Spanish justice eventually prevails and Miotto and Brimmell – guilty of nothing more than fighting to save the country they love – win their appeal.

“The whole episode is profoundly disturbing but not altogether unexpected,” he said.

The lawyer for the pair, Patricia Martín, confirmed the sentence will be appealed, claiming her clients had been found guilty although there was a lack of evidence. 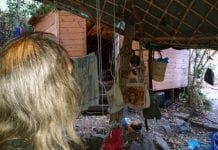 LONG READ: Hanging with Andalucia’s most notorious hippie commune to see if they spread more than peace and love