THERE are over 300 steps to the bottom of the old siege tunnel of the Casa del Rey Moro (House of the Moorish King) in the historic core of Ronda.

But this didn’t deter America’s First Lady Michelle Obama from witnessing first-hand how the Arabic defenders used to collect water during the regular sieges of the town during the dark days of the 14th and 15th centuries.

On a cultural break to explore the history of the Nasrid dynasty in Andalucia, she and her daughter perhaps inevitably spent a day in Ronda.

Having wandered around the old town, visited the bull ring and the charming Palacio Mondragon, she decided to take a spot of proper exercise.

By taking the steep staircase – la Mina – down to the bottom of the gorge (which incredibly the vast majority of tourists do not do) she was really getting to appreciate the rich history of the mountain town.

Restored in 1911, it was originally dug by Christian slaves to get water during times of siege from the River Guadelevin during the reign of Ronda’s Moorish king, Abomelik.

While it had been intended as a secret, it clearly didn’t stay that way, as Christians around Spain used the refrain that “in Ronda you die carrying water skins.” 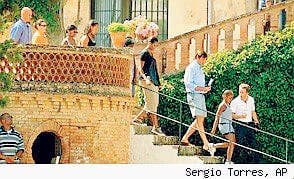 It was certainly a well known and by the time of the collapse of the Arabic rule in 1485, Ronda had been receiving foreign visitors for some 1500 years.

Established in 9BC, it is one of Spain’s oldest towns and in Roman times was completely independent with a thriving wine industry and its own coinage, fittingly with a tendril of grapes on its flipside.

A bustling military bastion known as Arunda – which means ‘surrounded by mountains’ – renovate any old building in the area and you are bound to find something of interest.

Take the recent discovery at the 12 hectare finca of Morosanto, near Arriate, just outside Ronda.

Here, on a lovely wide open slope, archaeologists have found a ‘lagar’ or grapetreading floor and pipes through which wine was transported to vats.

The discovery – as well as a series of columns, statues and a 21-metre Roman swimming pool and sauna – now means that historians can link the production of wine in Ronda to 3AD.

Nearby, in Ronda la Vieja, Dutchman Aart van Kruiselbergen found an upturned plinth in his back garden that
had once stood the weight of the region’s former Roman govenor.

It was being used as a garden seat and was painted white and turned on its side.

“It was only when we were re-organising the garden that we turned it over – using a tractor as it was so heavy – and found this inscription to the govenor of the time,” explains Aart.

“It even had the holes where the feet of the statue used to fit.”

But you can certainly feel the weight of the Romans just wandering around the old parts of the town, which
are full of stunning corners, arches and doorways.

One of its three main bridges across the Tajo (or Ronda’s famous gorge) is often called the ‘Roman bridge’, although it is actually Moorish in origin.

Look west from any vantage point along the top of the Tajo and try and spot the flattened out hilltop where the Romans built their formidable fortified town of Acinipo.

A 20-minute drive from the town, Acinipo is an incredibly haunting place, particularly during stormy weather, when you really feel you are on top of the world.

Take a wander around the site, where they keep finding new buildings every year, and marvel at the amazing
amphitheatre.

But before you take the drive there you should start any walking tour of the town at the oldest, most interesting part of Ronda, down at its ancient Arabic baths.

Said to be the best preserved example in Spain, the baths have little changed since Arabic Ronda – then on the extreme Western flank of the beleaguered Kingdom of Granada – fell to Christian monarchs Isabel and Fernando after a long struggle.

An atmospheric place built mostly in the 13th century, a virtual reality film takes visitors back to when the Moors knew it as Runda.

In both English and Spanish, ten minutes apart, it is about as good an introduction as you are going to get to any town in Andalucia.

From here it is an easy walk up into the Casco Historico, which is a wonderful place to while away a morning or afternoon. 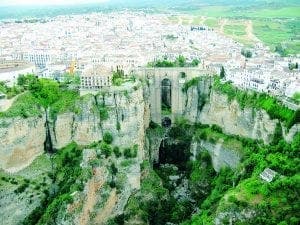 A new initiative now keeps most buildings and museums open until midnight on Fridays and Saturdays, with the town trying to encourage more tourists to spend the night here.

A few paces up the hill and you arrive at the aforementioned Casa del Rey Moro, the house of which is actually an 18th century mansion, which was once rented by Withnail and I actor, Paul McGann.

Keep on going and you will finally get to the famous Tajo bridge and its breathtaking views, as well as the bull ring, which is one of Andalucia’s top visitor attractions.

It is particularly worthwhile for its Goya etchings and the perfect proportions of its soft sandstone arches.

One of the oldest in the world it was here that Michelle Obama ended her tour, before taking a bite of lunch at
a nearby restaurant.

Best of all, as she left for the winding 45-minute drive back to her hotel on the coast, the world’s most powerful woman is said to have told local dignatories she would “definitely be back,”… and next time with her husband!

Now that would be another fabulous step in the history of one of Spain’s most evocative towns.