EXCLUSIVE By Jon Clarke in Huelva

A NIGHTCLUB doorman has revealed to the Olive Press that he knows the key figures behind a paedophile gang that kidnapped missing Maddie McCann. 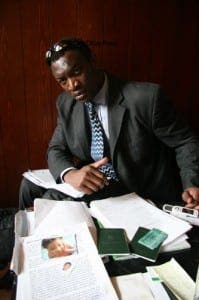 Marcelino Jorge Italiano, 36, has told Spanish police that a group of high-ranking lawyers, based in Faro and Albufeira on the Algarve, are linked to a paedophile ring that abducts children.

The Angolan, who worked in club security on the Algarve for ten years, claimed that he is “terrified” for his safety after confronting the gang.

“I think there have been over a dozen children kidnapped,” he told the Olive Press.

“They prey on the weak and vulnerable.

“They are ruthless. I have been attacked twice for trying to investigate it and even lost my front tooth.”

The six foot four inch bouncer – who has now fled across the border to Spain – gave his dossier of information to the Policia Nacional in Huelva this week.

His lawyer, who was present during the hour-long interview, told the paper: “He seems credible and believable and he does not trust the Portuguese police.

“He also seems pretty convinced that Maddie may have been taken from Portugal to the US.”

Italiano, a former semi-professional Basketball player, claims the key figures include two businessmen both based on the Algarve.

He insists that the group has high level contacts in Portugal’s judiciary and links to a legal practice in London.

He told detectives that he got much of the information from the ex-wife of one of the businessmen and has photographs of the group.

“I know these people were involved and I have been told that Madeleine may now be in America,” he said. “I can’t say how, but I have known these people and believe they can get away with anything.”

In particular he wants to give the information to the family of Maddie, who went missing while on holiday in the Algarve in 2007.

A spokesman for the family Clarence Mitchell told the Olive Press: “We are taking this seriously and want to talk to him.

“We are aware of one of the names mentioned and are already investigating.

“We plan to come over to talk to him.”

He confirmed that a possible link to the high-level ‘Casa Pia’ paedophile ring was not being discounted.

In September six men including a solicitor, a former ambassador and a TV presenter were jailed for sexually abusing 32 children living at Casa Pia homes across Portugal.

According to the main witness Pedro Namora, who is now a lawyer, there were many wealthy members on the Algarve and they regularly used houses down there.