IT is an area little changed in a century.

The charming Genal Valley, which sits between Ronda and the Costa del Sol, is a huge green valley full of chestnut forests and timeless white villages… oh, and one blue one (see box below).

A paradise for hikers and wildlife lovers, it boasts one of Europe’s cleanest rivers and has a terrific range of charming local ventas.

Well off the usual tourist trail, the Genal Valley gives visitors a chance to experience what Spain was like in days gone by.

And at the mouth of the valley, at the Algaba centre, you can even discover what life was like in prehistoric times, with its fascinating replica village.

Carry on and after 10 minutes you will arrive in Alpandeire, a stunning white village, with one of the most spectacular churches – actually a cathedral – in Malaga province. 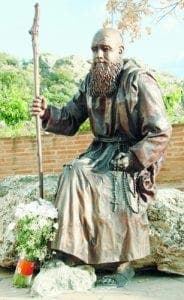 Here visitors can literally follow in the footsteps of a saint, Fray Leopoldo, a capuchin monk (left) who devoted himself to religion from the age of 35, after being born in the village in 1894.

Steps began in 1961 to beatify him – with believers hoping this will lead to him eventually becoming a saint.

It is a charming loop, with excellent, well-signposted walks, from each of the villages.

Farajan was once named ‘a white swan on a pool of hope’ by Ernest Hemingway, and Cartajima boasts perhaps the best view of the Genal Valley and maybe its finest lodgings in Hotel Los Castanos.

Without a doubt, the best time to visit is November and December when the chestnut trees turn the slopes into a glorious display of golden brown and the nearby tracks are strewn with chestnuts to pick up.

Another way of discovering the Genal Valley is by taking a leisurely drive down the A369 between Gaucin and Ronda, a stunning road which weaves its way through the valley, offering breathtaking mountain views along the way.

There are some lovely villages off it, the best of these being Benalauria, with its fabulous restaurant Molienda, a former mill, which has been perfectly preserved and serves the region’s best local – and mostly organic – fare.

An excellent loop back to the coast takes you off a turning to the left, signposted for Estepona, from the village of Algatocin.

From here you can visit the two charming villages of Genalguacil – which is famed for its artists and, in particular, its bi-annual art festival, which is a must visit – as well as Jubrique, a more industrious place, just 45 minutes from Estepona.

In particular, make sure to stop at the wonderful recently opened restaurant of Meson Pozuela, run by a Dutch couple and not just authentic in look, but serving up some terrific local fare.

Not exactly known as part of the Genal Valley, Gaucin sits at one end of the area. An equally fascinating place, here, you will not only find plenty of decent restaurants, but also good places to stay.

Known as the Balcon de la Serrania (the Balcony of the Serrania) it has amazing views down to Gibraltar and Africa and a well-established expatriate community, known for its artistic talents. Every year the town holds an studio open day and art market. 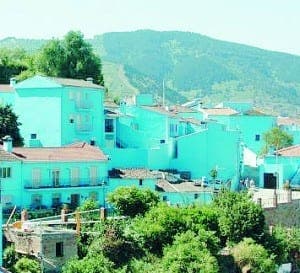 Feeling blue? Juzcar should cheer you up

Are you looking for something completely different? Well Juzcar certainly offers an alternative look to the ubiquitous pueblo blanco.

For this tiny village is painted entirely blue… and in, what is bound to be a hit with anyone under the age of 10, the village was chosen by Sony Pictures to promote their Smurfs in 3D film in June 2011.

Juzcar beat competition from 200 other villages because it looked most like the fictional village where the Smurfs live.

A year on and it has received over 130,000 visitors – that is more than 350 a day. Not bad for a village of just 250 residents – and no surprise then that locals voted to keep it blue.

Guided tours (Smurf-themed, naturally) are available all year round. 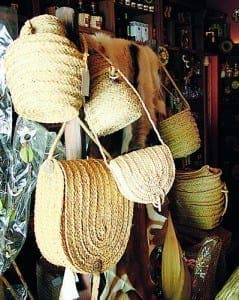 What to buy – esparto bags

One thing to look out for in the Genal Valley are baskets woven out of esparto grass that grows in the area. Once the main source of income for many families in the Sierra de las Nieves, sadly esparto products are now a dying trade.

In Igualeja however you can visit a womens’ cooperative that aims to keep the tradition alive as well as forming jobs for locals.

How an Andalucian weed promoted literacy in Victorian Britain