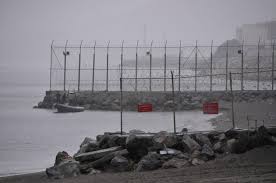 TODAY marks one year on from the drowning of at least 12 migrants at El Tarajal beach off the enclave of Ceuta in north Africa.

The Guardia Civil fired rubber bullets and tear gas into the sea as migrants attempted to swim to shore from Morocco, leading to the deaths of the dozen people in the following melee.

But Human Rights Watch has announced that there has been very little progress towards justice for those who died and their families.

“The survivors and families of the victims deserve to know the truth and see justice done.”

There have been several reports from NGOs of human rights abuses and excessive use of force at the border over the past year.

The European commissioner for migration, Dimitris Avramopoulos, is visiting Ceuta and Melilla in March this year.

“Every year thousands of people risk their lives trying to reach Europe, and there is plenty of evidence to demonstrate that Spanish practices at its borders make those attempts even more dangerous,” added Sunderland.

“If Avramopoulos is serious about tackling the EU’s dysfunctional migration and asylum system, he shouldn’t overlook the abuses in Spain’s enclaves.”