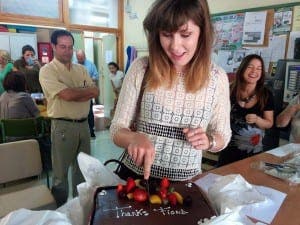 IT’S over. I am no longer a maestra in Motril.

Last Friday, I said my goodbye to the teachers and children of CEIP Garvayo Dinelli and I was completely surprised and humbled by the send-off I was given. I was overwhelmed by all the gifts, cards and scrunched up notes that were handed to me by various pupils, which bore thoughtful messages scribbled in both English and Spanish. After my last lesson with a year five class, one girl asked me for my autograph and before I knew it sheets of paper being thrown at me from every corner of the room.

I was late upon arriving to the staff room at break time as a result of embracing my new duties as school celebrity. When I eventually arrived, all the teachers were waiting including Lola, my coordinator, who was beaming. She led me over to a massive parcel which I unwrapped to reveal a massive chocolate cake, personalized with the words, ‘Thanks Fiona.’

My first reaction to this was that this would have cost a good forty euros at least and according to Lola, the cake had been ordered from the ‘best’ pastelería in Motril. My second reaction was the immediate sense of relief I felt at having completely messed up the carrot cake I had badly attempted to make the night before (never trust websites which “convert” grams or ml to US cup conversions unless you want some kind of stodgy looking thing). A modern oven always helps too.

I was also presented with Pepe, a cuddly-toy bull who, in terrific Andalusian fashion, moos when you squeeze him. Lola made a speech and I unexpectedly found myself getting quite emotional. I then also tried a go at the whole speech-making-thing too, although any words I did manage to mumble in Spanish were prematurely drowned out by the paparazzi of kids crowded in the door of the staff room.

Before writing this, I read the first blog I wrote for the Olive Press back in December and it made me reflect on how much things have changed since I started. My last week at Garvayo was certainly an eye opener – a long cry from my first week there where I felt isolated and confused by the way in which I was welcomed. I had turned up to a primary school which couldn’t have been more different to the one I went to, where things were run so differently. There was never any rush, any register that I saw being taken, any visitor book to sign or any fire alarm drill to practice.

I wouldn’t have changed my school for any other, though and looking back, like in most things in life, it was all just a matter of time to get used to it all, including the teaching.

Teaching can be hard. It requires a lot of patience and a lot of encouragement. There’s a lot of repetition – explanations, presentations and more explanations for the kids who were either talking, day dreaming or (in most cases) having a mothers meeting in the toilet. It’s a bit like stepping into new shoes as a child – first you step into them to get a general feel, before excitedly wiggling your toes about to see how much room you’ve got. The first time I stepped into a classroom, I learned how hard it was to try and hold the attention of twenty kids who did nothing but opened their mouths every time I opened mine. After a few months, I did the wiggling. I learned the names of the goodies, the not-so-goodies, I discovered and came to admire the innocence, magic and beauty that there is to a child’s imagination and I decided how far I could take everyone.

It’s been challenging yet rewarding and I wouldn’t have had it any other way.

There’s Paula for example. Paula is a year six girl who has, for the best part of every class I’ve taught this year, shown the most amount of disinterest and boredom in anything I think I’ve ever possibly seen in a person. She never paid attention to anything I taught in class, let alone participate. A few weeks ago I encouraged her to read out a sentence she had reluctantly written in her book. She was very embarrassed, but she did it and the whole class burst into applause. After that day her attitude changed. She was like a different Paula – one wanting to learn. The day I left she handed me a note saying, “Dear Fiona, I know we aren’t great, but I love you very much and thank you for making English fun.” It made my day.

The past seven months have been an incredible, enjoyable journey; one in which I’ll always look back with fond memories. Not every day in my professional working life will I have the pleasure of doing to the skeleton dance, claiming to be a princess from ‘E-Shrek’, hilariously trying to make old parchment paper from cotton buds dipped in coffee water (the cleaner went mad the following day), prompting colleagues to write big ‘I’s in sentences or politely asking them if they can ‘hold it’ just that little bit longer before break time. Guess I won’t be doing the autograph thing either.

They say everyone has fifteen minutes of fame. I think I’ve had mine.

I’m going to miss it all.