A FILM based on Federico Garcia Lorca’s Blood Wedding has been nominated for 12 Goyas.

The Girlfriend (La Novia) has received more nominations for Spain’s most prestigious film awards than any other movie in their history.

Paula Ortiz’s adaptation of Lorca’s tragedy will battle it out with Juliette Binoche’s Nobody Wants The Night (Nadie quiere la noche), which has nine nominations.

Other films in line for an award include the thriller The Unknown (El desconocido) and A Perfect Day (Un día perfecto). 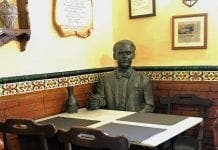