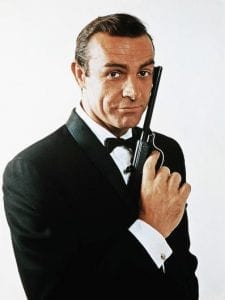 ‘THE name is Bond … James Bond’ is a signature catchphrase that needs no introduction.

According to estimates, one in three of us have seen or read something from the James Bond series.

Ian Fleming’s suave super spy may be fictional but the author once confessed that ‘the Bond character is a compound of all the secret agents and commando types I knew personally while in service to His Majesty’s Government.’

One such agent, a man named Alan Hillgarth (1899-1978), was both a close personal friend and influential colleague of Fleming’s. He had a deep connection to Spain and, by extension, to the ethos of the literary hero.

As a young man, Londoner Hillgarth set out to write spy/adventure novels. He traveled widely in search of literary inspiration, visiting Russia in 1920 to pick up some tips from ‘the brave new world of Bolshevism’.

Morocco, Egypt, Ireland and Bolivia were also on his itinerary, providing colourful background settings for his novels. But literary success eluded Hillgarth whose book sales were disappointing. His editors criticised his ‘inability to reign in his imagination’ and his ‘implausible and at times preposterous’ plots.

In 1932, undeterred by his tepid success as an author, Hillgarth found his way to Majorca, again in hopes of literary inspiration. He quickly mastered the language and, like many British expats, developed a powerful affinity for all things Spanish – its people, climate, culture, wine and historical traditions.

He soon became a prominent figure in Majorca society and began to to focus on activities other than writing. Namely he began working in covert ways for the British government.

As Spain began its downward spiral into civil war, Hillgarth was able to pass important secret information back to London and, in many cases, directly to Winston Churchill. His reports were influential in His Majesty’s Government’s decision to walk the tightrope of non-intervention in Spain.


During WW2, Hillgarth was assigned to the British Embassy in Madrid as Britain’s most important intelligence officer in Spain, tasked with keeping Franco neutral and Spain out of the war. Had the Axis powers captured the Iberian Peninsula and, more importantly, Gibraltar, cutting off access to the Mediterranean, it would have been disastrous for Britain and the Allies.

One of the brightest young intelligence officers assigned to Hillgarth’s mission was a young lieutenant named Ian Fleming. The two quickly became confidants and together planned many  creative and covert intelligence operations while in Spain, crafting what became known as Operation Golden Eye to protect vulnerable Gibraltar and the Strait.  In the eventuality of a German invasion, the operation called for an elaborate guerrilla campaign targeting hostile ships, military installations and infrastructure.

They also created a vast spy network designed to maintain contact with London should the Nazis invade the Iberian Peninsula, travelling frequently between the Rock and Tangiers to create a fall-back territory should it be needed. Fleming would later name Golden Eye as the title for his 17th film.

The daring duo also played prominent roles in Operation Mincemeat,  in which fake documents, planted on a corpse were used to fool the Germans about Allied war plans. It not only changed the course of the war, according to many historians, but loosely provided the basis for another Bond movie, You Only Live Twice.

It would probably be a stretch to compare Alan Hillgarth to the ruggedly resilient Sean Connery, the dapper Roger Moore or the suave Pierce Brosnan but his Spanish connection with Ian Fleming was instrumental in shaping the James Bond character.

Benahavis has it all: The ultimate guide to the hidden gem’ of Spain’s Costa del Sol