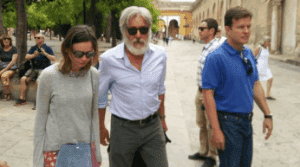 HARRISON FORD has been spotted taking in the sites of Sevilla with his wife Calista Flockhart.

The Indiana Jones star, 73, was seen sporting a Santa-like beard and shades while walking arm in arm with wife Calista, 51.

The pair were snapped as they strolled around Plaza de Espana and checked out the traditional Flamenco scene.

Ford is taking a break in the Andalucian capital before he begins filming for Blade Runner 2 in Hungary.

Calista sported a small camera and was seen taking snaps of the world famous architecture.

They had spent the weekend in Toledo where they met and greeted fans.

Once finished in Spain, Ford will likely move on to Budapest to begin filming.

Spain tries to find relatives of over 5,000 Hungarian Jews saved from Nazi persecution by the ‘Spanish’ Oskar Schindler