A SECRET collection of nudes owned by Spanish monarchs is to go on display across the pond. 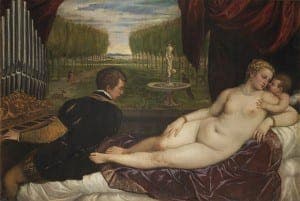 A large number of the paintings were privately owned and ogled by the likes of Philip II (reigned 1556-98) and Philip IV (reigned 1621-40), and clandestinely stored in secret hiding places.

In total, 28 paintings have been loaned from the Prado in Madrid by artists such as Titian, Tintoretto and Rubens.