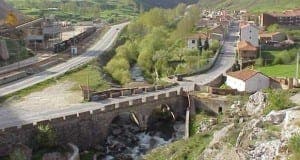 AN entire Spanish village has been put on the market for €122 million.

Cinera de Gordon, in Northern Spain, houses 800 residents, and comes complete with 128 houses, 12 flats, a football pitch, a public swimming pool, a cinema and a mine full of coal.

The once buzzing mining hub has become a shadow of its former self after the company managing its mine went bust last year.

The village had belonged to Hullera Vaco-Leonesa for decades, but the bankrupt company is selling off its assets, which includes Cinera de Gordon.

“The worst thing about all this is that we found out our town was up for sale through the internet, when the judge issued the writ,” one local, Jose said.

Another seemed more optimistic, hoping a property company will buy it all up.

““It’s a very good place for tourists and for some property company to come along and buy it all up,” he said, “As for the closed mine, some Chinese have shown an interest.”

The mining industry in Spain has suffered since the country began pushing for renewable energy sources, with consumption of coal falling by 50% in the past year alone.