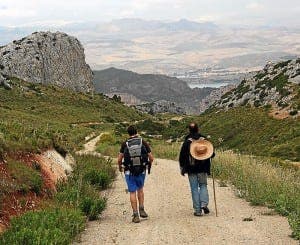 AFTER scrambling heroically to the top of one of Malaga’s highest peaks, I was more than ready to toast our success and call it a day.

But despite providing stunning panoramic views, a fleeting opportunity to forget the stresses of life and the chance to negotiate some tough, almost virgin, mountain terrain, the Two Peaks and a Paddle trail does not offer a cable-car back to the start.

With hindsight I’m glad, because although the summit was stunning, it was only the beginning. We hadn’t even had breakfast yet.

To rewind, I had been invited to climb two 1000-metre plus mountains and row five km across a lake in the stunning El Chorro region. It’s not an official route, but I was told it was one of the best.

The only catch was that it all had to be done in one back-breaking, awe-inspiring day.

Therefore, the crucial aspect of the trail is timing. The first peak must be reached in time to enjoy the sunrise and the second must be triumphantly conquered to enjoy the same day’s sunset. 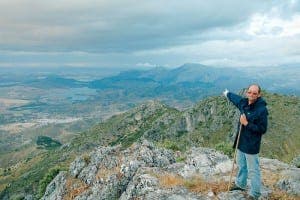 We met our unofficial guide Martin Levien in Ardales at 5am. He ensured the pace was brisk and our four-strong group soon reached the path’s end in just over an hour. We then began our near vertical scramble to the top of the first mountain La Huma, which towers over the lake district below.

A word of warning to would-be trekkers – I highly recommend wearing trousers, even in hot weather, as the army of thistles will have their evil way with your shins – a lesson I learnt the hard way.

We quickly realised as we ascended the mountain that our grand plan to reach the summit as the sun rose would be largely scuppered by a band of uncharacteristic grey clouds.

Yet, after a strenuous scramble, our spirits were anything but dampened by the low-lying cloud that greeted us when we arrived.

It was a surprisingly cold morning at the summit which meant we were thankful for having brought precautionary jumpers, woolly hats and rain jackets.

Martin, the keen organiser, had the inspiration to bring a flask of hot coffee accompanied by a generous amount of chocolate.

This was the first real break for two hours and when the clouds occasionally parted we had the most breathtaking views over the unspoilt beauty that Andalucia can offer. Not even rain or cloud was going to spoil the moment… or, as mentioned, the thought of doing it all again in a few hours time.

The descent back down was easily more challenging than the journey up.

While Martin – in his late 50s – practically ran down the slope, my technique consisted of falls, trips and skids, amusing the group and holding up their more assured progress.

But in between my regular stumbles I was still left awestruck by the surrounding mountains that towered over us.

The sun would intermittently break out from between the clouds to send rays of divine light onto small parts of the landscape. We stopped at one point to watch a partridge with her chicks and then stumbled across an ancient cave house.

As Martin explained, this was a practically forgotten path, which crisscrossed ravine and dale en route to our breakfast stop at restaurant El Mirador beside Lake Guadalhorce.

After a few tough hours of tackling slippery slopes and biting shrubs we eventually arrived at the El Conde de Guadalhorce dam, from where the once forbidden Caminito del Rey begins.

Previously known as the ‘world’s most dangerous walkway’, the cliff-hugging Caminito has been rebuilt and reopened in 2015 with an immaculate – and very safe – wooden walkway. But don’t fear, the bright blue river gushing 100m below and stunning vertical cliff faces are still just as jaw-dropping.

This wondrous sight signalled the first third of the day was complete, so we celebrated with a hearty and much-needed breakfast of bacon and egg butties. 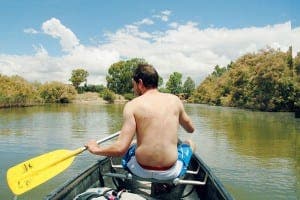 After a short break to recharge our batteries we carried our canoes, which were conveniently waiting at the cafe, down to the lake side. You can also easily rent canoes from the cafe (and a few other nearby spots).

And then, with consummate timing, the sun came out for good as we began to row lazily across the tranquil lake, which stretches for miles, all the way to Ardales.

Having suffered a few hairy moments on the earlier hike, the canoes heralded the arrival of a very welcome relaxed stage to the day.

After a good two-hour row we arrived at our landing point, complete with Martin’s jeep ready and waiting for us to load up and head onto a late lunch at the simple La Cantina. 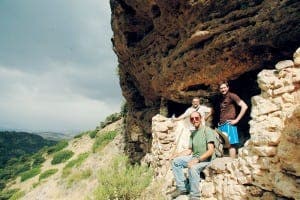 A few beers in, I must confess there were serious rumblings about some of us stopping our day here. But a bit of geeing up later and we quickly agreed to embark on the final challenge.

Our weary legs eventually set off to conquer Mt Caparain, which looms some 1,300 metres above sea level, at 7pm.

We determinedly soldiered up the much gentler, better maintained and marked mountain path that twisted and turned towards the summit.

As dusk descended we reached a plateau that was adjacent to the elusive peak we had been striving to conquer all day.

With an almighty push we fought past the remaining rocks and bramble to arrive at our promised land – just in time to witness the sun pass behind low-lying cloud!

With now customary timing Martin fished out some still cold beers from his rucksack and we toasted the Two Peaks and a Paddle Trail… one of Andalucia’s very best. And that’s saying something. 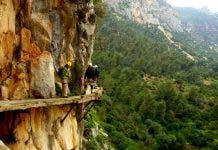 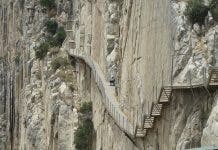