NOTHING gets folk into the Christmas spirit like lashings of festive fare and the Andalucians don’t stint on seasonal sweet and savoury goodies at this time of year. 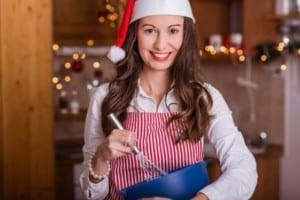 Shop and supermarket shelves are groaning with tablets of chewy turron almond nougat and speciality sweetmeats representing many towns in the region. Some shopkeepers will even give you a free sample and a shot of sticky sweet anis (aniseed liqueur) to go with it.

Meantime, treat your tastebuds to our virtual tour of the region’s festive favourites.

Displayed in large pick-‘n’-mix boxes in most main supermarkets, these addictive Andalucian shortbreads epitomise Navidad not only in Andalucia but throughout Spain.

Polvorones were invented in the 16th century as a way to use up surplus cereals and lard.

They are almost exclusively made from flour, sugar, ground almonds, cinnamon and lard, however with a halal and vegan version now on offer in Carrefour, no one should feel left out. Glazed or coated in icing sugar, they come in a cornucopia of flavours, with chocolate and sesame seed among the most popular.

This tooth-achingly sweet snack is one for marzipan fans. It consists of marzipan dough shaped into a block with a filling of candied fruits and pumpkin jam. Its true origins are shrouded in mystery, although some have attributed its rise to the French invasion of Cadiz in the 19th century. 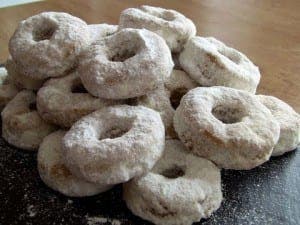 Named for the quantity of liquor that finds its way into the recipe, these doughnut-shaped biscuits also contain olive oil, sugar, lemon rind and sometimes a shot of spirit too.

It looks like a weapon but this truncheon-shaped sweet will only do damage to your waistline. The king of candy in Cordoba’s Subbetica region is made of chocolate, almonds or peanuts, sugar and cinnamon, and is thought to have originated in the confectionary centre of Priego in the 17th century.

A pine nut pastry served during the build-up to all holy weeks. Sesame oil gives these sweeties a distinctive, Moorish and more-ish flavour.

The simplest of guilty pleasures, these tipsy treats are also called borrachuelos (‘drunkards’, in Spanish) because the dough is previously mixed up with white wine or anise liqueur (‘borracho’ means ‘drunk’ ). The pastries, deep-fried and glazed with sugar or honey, are sweet staples over Christmas and Semana Santa. 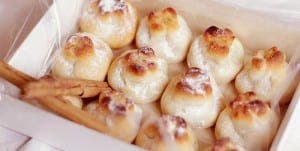 The sweet of nuns, these egg yolk and sugar delicacies are said to have been concocted in convents from around the 15th century. The Tajo version is renowned throughout the Spanish-speaking world thanks to Segovian patissier Alejandro Escolar. He put his own stamp on the sweet when he began making it in his Ronda confiteria during the early 20th century.

Another delight for the marzipan fan, alfajor cookies are of Arabic origin. A veteran staple of Andalucia’s Christmas table, they originate from the mid point of the Al-Andaluz period around the 12th and 13th centuries. Made with almond paste, nuts and honey, they look a little like macaroons. 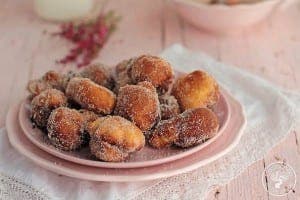 A papajote is not just for Christmas. Also cooked up during Lent and Semana Santa, these deep-fried disks (not be confused with the Murcian version) contain milk, flour, sugar oil and a pinch of salt.
Belen de chocolate, Rute, Cordoba

It would be sinful to forget the one dulce that marries Andalucians’ sweet tooth with their love of belenes (nativity scenes). Every year, talented artisans in the town of Rute create this amazing edible version in chocolate.

Gazpacho with attitude, this thick chilled tomato and garlic soup is traditionally topped with hard boiled eggs and jamon and is a popular Nochebuena (Christmas Eve) starter.

Not a dish limited to Andalucia, but certainly one that draws around 40,000 people to the town of Torrox  when it is cooked up there on the last Sunday before each Christmas.

It is a simple peasant dish made of dried breadcrumbs cooked in wine and olive oil in a huge pan before being dished out to a ravenous crowd.

An enticingly warming dish for cold weather days, this meal in a bowl is made with chunks of ham, hard boiled eggs and chickpeas.

Andalucians have developed a taste for this relic of 1970s kitsch, the stuffed hard-boiled egg. Many versions prevail, with some of the more upmarket containing caviar or salmon.