SPAIN’S government has threatened to ‘cut off’ funds for Catalonia unless it proves it is not using them to pay for its upcoming secession referendum.

Tensions are rising after Madrid said on Friday that it would tie regional financing for Catalonia to weekly certifications that no spending was authorised toward the vote, which is scheduled for October 1.

Right-wing prime minister Mariano Rajoy has repeatedly said the referendum is illegal and cannot be held.

“Not a single euro of the Catalans will be directed toward an illegal referendum that is wanted by few,” Iñigo Méndez de Vigo, minister of education, said after the government’s weekly cabinet meeting.

The threat to cut off fudns to the heavily indebted region comes at an already tense moment, as the push toward an independence vote approaches a point of no return. 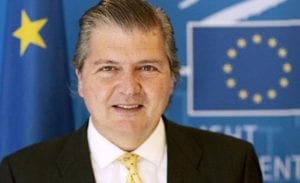 Méndez de Vigo said his comments were justified following a ruling earlier this month by Spain’s constitutional court, which declared that budget items destined for the referendum were unconstitutional.

It comes after the Catalonia government published a draft bill stating the region would secede from Spain within 48 hours of a leave victory in the referendum.

The Catalan government said Madrid was taking ‘another step to discriminate against the citizens of Catalonia based on how they voted’.

“The Spanish government is imposing excessive demands on the public services of Catalonia simply because of the opinions of the government of the Generalitat. We will not submit to this fear,” it said.

The funds are from the Fondo de Liquidez Autonómica, a credit line that the national government  created in 2012 to lend money to regions that could not issue debt in the financial markets during Spain’s economic crisis.

Catalonia has since received approximately €63bn euros from the fund and is due to receive another €3.6bn this year.

“This is a very important move, because these €3.6bn are meant to improve the situation of the Catalans,” Mr Méndez de Vigo said. He said that Carles Puigdemont, Catalonia’s current first minister, would bear responsibility if the funds were cut.