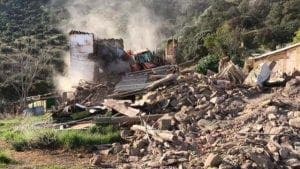 A GREEN group is calling for the protection of a historic mining village, in Castilla La Mancha.

Ecologistas en Acción Valle de Alcudia has put forward a document to the Junta of Castilla La Mancha, in a bid to declare the settlement of Las Tiñosas a cultural heritage site (BIC).

It comes after tensions arose between owners of the land and descendants of miners from the village.

At the end of January the plot owners began to demolish empty buildings, including an old school and houses which belonged to former miners and engineers.

However, it is still unclear as to who can legally claim ownership over this land.

According to the green group, the town’s folk were not warned prior to the construction work, nor were the electricity companies that still provide power and cables in the buildings.

The ecology group believe the owners had not sought legal permission before demolishing the buildings and reported the activity to the Guardia Civil, who has now stopped the work.

The Junta’s decision is yet to be announced.

Spain is home to 11 types of snakes, three of them venomous vipers—but how dangerous are they?