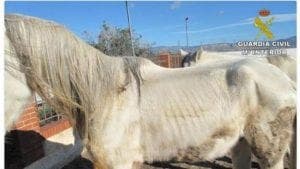 SEVEN malnourished abandoned horses have been found living among manure, rubbish dumps and sharp objects on the Costa Blanca.

A neighbour alerted officials to the animal abuse, in which the horses were living on a private finca in Mutxamel in Alicante.

The owner – a 24-year-old Spanish man – is currently being investigated by the Servicio de Protección de la Naturaleza (Seprona) for crimes related to the protection of flora, fauna and domestic animals.

He could be facing up to a year in prison.

The finca and stables were found covered in mud, with manure and piles of rubbish stretching as far as the riding school.

Officials also found a number of sharp objects which could severely injure the animals, such as a pitchfork and scissors.

During the inspection officials discovered the horses were suffering from symptoms of malnutrition and neglect, such as extreme emaciation and a lack of hygiene.

While the horses did not have adequate medical documentation, they were also not legally registered with the Ayuntamiento.