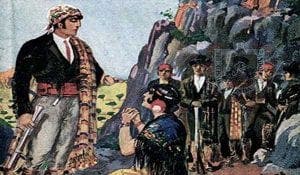 THE word ‘bandit’ typically evokes an image of a stealthy robber in black, stealing money and other treasures.

But in Andalucia during the 18th and 19th centuries, bandits were so much more. They were flamenco dancers, bull-fighters, smugglers and travellers.

The bandits played dangerously along the line of separating good and evil and terrorizing and relieving people all at once. Although they would show no mercy to their victims, many bandits would then redistribute the stolen goods to the poor who were denied justice by the law. They established their own sense of justice at a time when widespread poverty and wealth inequality infested Spain.

The mountain range of Andalucia was the perfect playground for these rebels who defied convention and transversed moral and ethical boundaries. In his book History of the Islamic Spain, the historian Reinhardt Dozy calls the mountains the most romantic part of Andalucia where majestic forests in the chain of mountains inspire a kind of poetic terror.

The bandistry in Spain goes way back to the Roman times. The term ‘bandit’ was first used as a nickname for Viriathus, a Lusitanian leader who resisted the Roman rule and was branded as a brigand. Then there were the Almogavars of the Christian Iberian kingdoms and Monfíes during the Moorish rule. Finally, after the French invasion in the early 19th century and the consequent civil unrest in Spain, the last generation, and perhaps the most famous, of bandits thrived in the steep mountains of Andalucia.

Fully integrated into these vast Andalucian terrains, the bandits had the highways of the dense woods in the palms of their hands. Their expertise provided the perfect platform for not only burglary, but also smuggling. Smuggled goods from the southern hemisphere of the world entered Europe through Gibraltar and were transported through the many routes along the mountainous regions. Along with tobacco and textiles – the most sought-after items- culture, news and ideas spread through these smuggling paths.

One of Andalucia’s most famous bandits was José Maria Hinojosa Cabacho, known as ‘el Tempranillo’, or the Early Bird. His fame has grown to the point that much of his history cannot be separated from legend. Nicknamed the King of the Sierra Morena, el Tempranillo was an early Spanish Robin Hood, stealing from the rich and giving to the poor. During his time, he was known for being charming and polite, even in the midst of a heist, so much so that English traveller John Ford wrote that the bandit was the ‘love of Andalucia.’ Regardless of his popularity, el Tempranillo was not a man to be messed with. By 13, he had killed a man and joined a gang of bandits to avoid arrest. But by 27, he was pardoned by the king and named the commander in chief of Spain’s police. Ironically, or perhaps appropriately, el Tempranillo

met his end at the hand of another bandit as a police officer in pursuit.

Sevilla-born Joaquín Camargo Gómez, “el Vivillo,” was another Robin Hood bandit. A tobacco smuggler, he is known for an exploit near Setenil, during which he bound, gagged and robbed 25 merchants coming from a fair. Regardless, el Vivillo was a well-respected and admired captain of a gang of bandits, but after accumulating a fortune from his escapades, he embraced a more righteous lifestyle as a picador, one of the horsemen in Spanish bullfights, garnering for himself more fame. He would later move to Buenos Aires with his family and, according to reports at the time, become a businessman. On July 16, 1929, the family man lost his wife and took his own life out of sorrow.

But not all bandits were so warm-hearted and loving. Francisco Ríos González, who went by “el Pernales,” was cold and heartless. He cut down anyone and everyone in his way, and mistreated those in his family. For him, banditry was not an opportunity for social justice outside of the law, but rather a way to satisfy his desire for violence. A pastor turned criminal, el Pernales had no sense of loyalty, murdering fellow bandits and delivering their bodies to the Guardia Civil to reap the benefits. In the end, however, he was shot by the Guardia Civil as he was fleeing to Valencia in hopes of one day reaching Mexico.

Juan José Mingolla Gallardo, or “Pasos Largos” (Long Legs), had the honor of being Andalucia’s last bandolero. After spending his time as a soldier in the war between the United States, Spain, and Cuba, he turned to hunting and stealing- both illegal at the time- to make a living. After being caught by the Guardia Civil and serving time in prison, he sought revenge, killing the park guardian who reported him to the Guardia Civil as well as his son. Maneuvering through the countryside, he was able to evade capture with his charisma and

knowledge of the land, up until the unfortunate moment the Guardia Civil found and shot him in the chest. While Pasos Largos escaped, following treatment for his wound and despite the protests of the public, he was brought back to prison. At 59, his popularity led to a pardon, only for him to return to hunting and go back to prison after working as the guardian of the property of a man he robbed years ago. It was two years later in the caves of Sierra Blanquilla that Andalucia said goodbye to its last beloved bandit.

But the legacy of Pasos Largos, along with the stories of those before him, outlive the lifespans of these thrill seekers.

The memories of bandits are engraved forever in history through the arts. From the 18th to 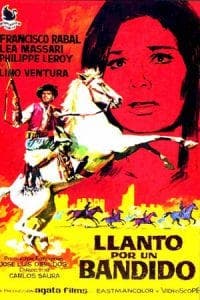 early 20th century, many artists fascinated by the phenomenon of banditry flocked to Andalucia to capture its grand, mountainous landscape. The drawings provide a window to the covert, adventurous lifestyle of bandits and the remote and risky paths they travelled on.

From the 1940s to the 80s, bandits made frequent appearances on the screen as the adventure genre took off in the Spanish cinema. José María “El Tempranillo” came back to life through the thrilling performance of Paco Rabal in the film Llanto por un bandido. Moreover, the lives of bandits were brought to homes through the popular Spanish drama series Curro Jiménez set in the mountains of Ronda.

Living on the edge of the good and the bad, Andalucia’s bandoleros have been immortalized by the artistic scribes who recorded the risky escapades of bandits, romantic travellers who witnessed their exploits firsthand and visitors today who still head to the rocky terrains of Ronda to trace back the steps of the bandits. Their legacy lives on.

Alex Trelinski - 22 Oct, 2021 @ 19:15
MURCIA nightclubs and function rooms have been allowed by the regional Supreme Court to use EU COVID certificates in order to achieve 100% capacity. The...