But most notably, he had a penchant for building opulent palaces and temples.

That man was the Old Testament’s legendary King Solomon and yes, he had expensive tastes.

But you may be surprised to learn that one source of his great wealth has a link to Andalucia. More about this later…

This past November, America’s space agency successfully landed the spacecraft InSight on Mars.

It was NASA’s eighth successful Martian landing. The lander’s mission statement proclaims a dedication to ‘promote the peaceful application of space exploration by developing technologies for human and robotic exploration of the moon, Mars and beyond’.

NASA’s mission statement is alive and well and also has a direct link to Andalucia. But again, more about this later…

The Rio Tinto mines are located along the river of the same name in the province of Huelva, Andalucia.

The mining complex is immense – so vast in scale that the man-made crater left behind measures several kilometers across.

Since 3,000 BC the Rio Tinto has been mined for copper, silver, gold and other alloys.

King Solomon and his Phoenician allies, circa 1000 BC, were quick to discover the vast mineral wealth scattered along the Rio Tinto.

Although the legendary ‘mines of King Solomon’ are shrouded in myth and Old Testament allegory, there is tangible archaeological evidence to suggest that much of the opulence of King Solomon’s temples was sourced from the Rio Tinto.

It is estimated that some 30 tonnes of gold and 30,000 tonnes of silver adorned his famous temples.

Archaeologists and mineralogists believe a significant percentage of his treasure was, in fact, mined from the Rio Tinto.

A section of the mining complex is still known today as Cerro Solomon (Solomon Hill). Meanwhile the nearby ancient pueblos of Zalema La Vieja (Old Solomon) and Zalema (Real Solomon) strongly suggest that the king was a full partner in the Rio Tinto mining project.

Following King Solomon, the Greeks, Romans, Visigoths and Moors mined the site. The Spanish government began operating the mines in the early 1700’s.

But in 1873 underinvestment, corruption and inefficiency led the Spanish government to sell the mines to the Rio Tinto Group, a British syndicate.

Since then, the Group has grown exponentially and today is among the world leaders in the production of minerals, with operations on all six continents.

One of the most common reactions to visiting the Rio Tinto mining complex is a comparison to a Martian landscape – and that’s not so far-fetched for a number of reasons.

The 5,000 years of mining along the Rio Tinto River has left the landscape with hues of dusty pink, brown, yellow, red and grey.

The various minerals, the mining tailings, centuries of erosions, sedimentations, oxidation and the gargantuan proportions of the complex have added to the otherworldly Martian-like environment.

This comparison has not been lost on NASA. In 2005, its space rover Spirit landed successfully on the red planet.

It was expected to travel 0.4 miles and provide three months of data.

To the unexpected surprise of engineers, Spirit traveled 7.8 miles and gave an astonishing 5 years of analysis of the chemical and geological makeup of Mars.

Ultimately, Spirit got stuck in a veneer of soft soil but was still able to send back geochemical analysis.Becoming immobile was a blessing in disguise as the rover was able to drill deeper and send more definitive analysis back to Earth. 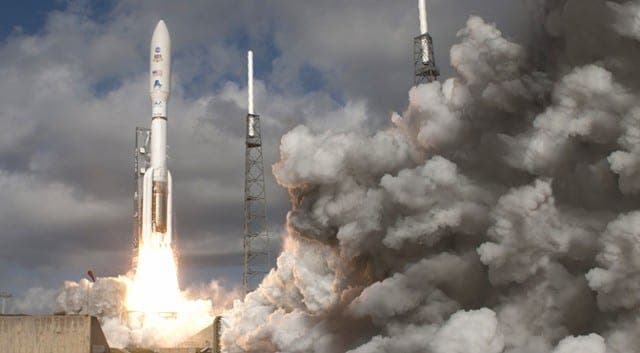 NASA scientists determined that the rover was stuck in a cache of ‘sulfates, hematite sedimentary rock and a composite called Jarosite’ – precisely those elements that compare to the trace elements dominating the Rio Tinto complex.

This is a geological and chemical environment that rarely occurs on Earth but is almost an exact environmental likeness to the mineral deposits of the Rio Tinto. And it certainly got the attention of NASA scientists.

Since 2005, NASA has run a series of dress rehearsals in the Rio Tinto to test future space technology on a ‘geophysical landscape closest to conditions on the Red Planet’.

Perhaps the most exciting speculation comes from evidence that ‘life forms’ may indeed be found on Mars.

It has long been assumed that the waters of the Rio Tinto system were so contaminated by the toxicity of the chemical ‘cocktails’ involved in 5,000 years of mining that no life existed.

In fact, a life form does indeed exist in its ‘red’ waters: abundant one-celled microbes called Extremophiles which are unique to the Rio Tinto.

Their ability to survive in an extreme geophysical environment similar to Mars could be a clue as to the possibility of water, and therefore life, on Mars. Stay tuned….

The last significant mining activity near the Rio Tinto was in 2001. Today, it operates as a tourist destination.

Huelva’s Rio Tinto Mining and Railroad Museum has displays that explain the mineralogical and cultural history.

The best way to view the Martian-type landscape is to ride the restored 21km train system that weaves its way through the complex. It is a real glimpse into the past.

And just when it seemed that the final chapter in the Rio Tinto’s history has been written, NASA’s presence suggests not.

Who knows – they just might be looking at this little-known corner of Spain for the space technologies of the future!