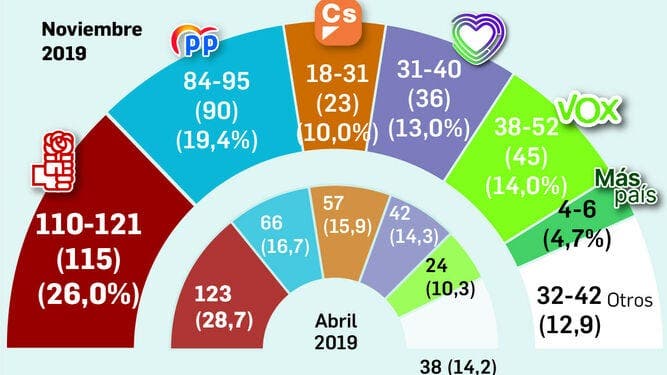 WITH just days until the general election, Spain seems to be heading towards yet another hung parliament.

A new survey by Ipsos has predicted that no party or coalition will gain the absolute majority of 176 seats needed to form a government this Sunday.

It also found that after a dramatic month, which included violent Catalunya protests and the removal of dictator Franco’s body from the Valley of the Fallen, a large number of voters are now undecided.

The poll, which interviewed 2,011 voters, concluded that the most likely scenario would see the conservative Partido Popular (PP), Ciudadanos and Vox accumulate 158 seats, while the left wing parties (PSOE, Unidos Podemos and others) could scrape together 175, just one short of the absolute majority needed.

Conducted between October 28 and 29, the survey also revealed that 20% of Ciudadanos supporters and 750,000 PSOE voters are now unsure of who to elect on November 10.

It means undecided voters could have a huge impact on the outcome, particularly if they remain or switch to the left.

Pedro Sanchez’s PSOE is most likely to win 115 seats, which would be a loss of eight since April’s snap election.

If he was to make an alliance with other left-wing parties, even in the best-case scenario, he would reach 175 seats, one short of an absolute majority.

The PP is forecast to pick up 90 seats after having its worst election in history earlier this year.

Far right Vox, meanwhile, will be the third-largest party with it predicted to obtain 45 seats, double what it has now.

Ciudadanos is set to be the biggest losers of the night with the survey suggesting the centre-right party will have just 23 seats, a huge drop from the 57 it has today.

In the best case scenario for a right-wing coalition, the PP, Vox and Cs would have 168 seats, eight short of the absolute majority.