“WE buy locally, but think internationally,” explains Joan Roca, as he shows me around the high-tech kitchen of his celebrated Catalan restaurant.

It is 10 minutes before service and his team of 30-odd chefs is surprisingly zen-like as they beaver away in their specific stations.

Broadly split into fish, meat, poultry and pastry sections – the latter overseen by his younger brother Jordi – the most eye-catching sight is a bank of ovens, where a series of meat dishes are being slow-cooked for up to an amazing 70 hours!

This is the engine room of the ‘World’s Best Restaurant’, according to TripAdvisor (in 2014), where the average wait for a table is currently 11 months.

“It is great to be recognised in this way by our customers,” explains Joan, who spends much of the year travelling to far-away places scouting for ideas. “We have had 10,000 diners this year so far coming from 56 countries. It is quite a mix.”

Recent guests have unsurprisingly included the UK’s chef extraordinaire Heston Blumenthal and Michel Roux, while Jamie Oliver is lined up for a visit in the next month or so. “We’ve not had Gordon Ramsay yet, which is a shame as I’d like to meet him,” he adds.

A personable chap – who is one of Spain’s best ambassadors for food – he tries to use local ingredients ‘as much as is humanly possible’ and keeps a close eye on trends.

Quality control is king, which is why he has stayed ahead of the game since he opened the restaurant alongside his parents’ older restaurant in Girona with his brother Josep, a sommelier, in 1986.

The place is currently so highly rated that it has been in the top two eateries in the world, according to food bible Restaurant magazine, for the last four years.

So it was a major treat to be flying up to Girona to be joined by some friends from London and Estepona for a monumental five-hour culinary master class.

Securing a table for six on a Saturday night, out of the 55 covers that each sitting provides, had been something of an obstacle course, to say the least.

We duly arrived at the door of the eponymous diner at 8.30pm, bristling with anticipation, the night having been perfectly set up by TripAdvisor’s surprising new accolade. 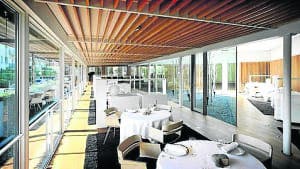 Normally highly fallible with reviews frequently written by rivals, or dullards who can’t tell the difference between capons and capers, the travel website had apparently got it right this time.

Or so we hoped… for in, at least, one key area the evening was anything but perfect.

The arrival was charming, up a wooden passageway into a pretty tree-lined courtyard, with comfortable looking tables and chairs perfect for an aperitif. Except that nothing was offered, as we were immediately led to our table inside.

The stylish interior, décor and settings made up for the rather hurried arrival, and the waiters carried just the right panache and knowledge that you would expect from a leading three-Michelin starred restaurant.

We signed up for the longer tasting menu, which weighed in at a rather alarming €190, but seemed better value than the shorter 8-course affair, which cost €160. For the simplicity of the meal and to ease things along we went for a €95 wine-pairing deal.

In all we ate 20-odd courses and it proved to be a good choice with the menu varied, original and exciting, starting with the arrival of a bonsai olive tree, off which we were encouraged to pick anchovy-stuffed olives from the nearby Ampurdan.

A quintet of amuse bouches from five countries arrived with us having to match up which came from Turkey (a stuffed vine leaf), Mexico (a mini burrito), Morocco, China and South Korea. It was a fun start and helped to break the ice. A bunch of truffle ‘bonbons’ from just 30 kilometres away, got us back to the local feel.

Next up came a beauty in the shape and form of vegetable stock, no less, slow-cooked for three hours and infused with delicate herbs, flowers and pomegranates. It was as stunning to look at as it was to taste.

We were soon chugging through some inventive fish dishes, including the splendid smoked eel and chestnuts, served on cellophane through which a couple of holes emitted a puff or two of toasted ‘yuzu’ smoke.

A prawn with vinegar, an oyster with anemone, mackerel with pickles and mullet roe, they rolled along in steady intervals, served up with, to be fair, rather uninspiring wine pairing choices (more of which later).

Things started to get interesting when the fish courses fused into meat and we had the skin of a sardine stitched onto pork jowl. This slow cooked invention, with the sauce of a suckling pig, was dubbed simply ‘surf and turf’ which didn’t do it justice.

The two main meat courses to follow had each been slow cooked for a couple of days and the tenderness was impressive. In particular the Iberian roast suckling pig with figs had an amazing balance, while the veal shin with ‘St. George’ mushrooms, marrow, tendons and truffle was stunning, cooked for over 70 hours!

By the time our puddings came we were finished, completely gone, which was a real pity as the so-called ‘chocolate anarchy’, which claims to have 50 types of chocolate in it, was simply breathtaking… one of those dishes you really want to go back to try again.

Oh, and we mustn’t forget the pulsating pudding, the genuine shock of the night, which came out moving on its stand. Basically ‘sourdough ice cream’ with cocoa pulp and dried lychees, it was delicious, and certainly raised a few laughs.

The big downside of the night though was the wine. Partly in a hurry we had selected the 12-glass accompaniment, rather than doing battle with the three large wine lists (one each for red, white and rose) that came out laden on a trolley.

To be frank, the mix was disappointing, particularly as it included no less than three Rieslings from Germany, a rather over the hill 1990 Grand Cru Chablis and a quite bizarre, oxidized 1986 Ribera del Duero, which was horrible.

At some point brother Josep came out to have a chat, but he hadn’t exactly sold them to us, or hung around to hear our vie ws.

He was, to be fair, as memorable as his wines, which, between the six of us, had cost us €570, with only the 1962 Montilla Moriles with our pudding standing out.

For that price we could have ordered two good clarets and still had change to buy half a dozen top Spanish wines. It took off the shine.

As we sat in the courtyard at the end of the night (once again, without being offered a nightcap) we mused that while the food had been incredibly good, it hadn’t quite blown us away.

With the debacle over the wine, I am afraid to say the Roca boys get only two out of three from me.

Spanish cities battle to turn on Christmas lights – in May!