AS we come to the later part of February our thoughts are beginning to turn to the end of winter and to warmer nights – always better for standing outside for a while.

Those of you who have been watching the sky during the past weeks will have noticed that Venus – that very bright “star” in the west after sunset – has been climbing higher and higher, and setting later after the sun every night.

Did you know Venus can be bright enough to cast a shadow? Another astronomical event has also taken place. Saturn, the bright yellow “star” in Leo the Lion, has just passed what is call opposition, which is when it is closest to Earth. Remember that Saturn is the planet with the wonderful rings, and it you ever get a chance to look at it through a telescope, even a small one, you will not be disappointed. Look for the bright yellow star high overhead around midnight, just to the west of the question mark shape marking the head of Leo.

In the last edition I shared some thoughts and gave some guidance to anyone who is thinking of buying a telescope. I said in the article that people constantly come to me and complain all they can see through their newly purchased telescope is stars.

This time I want to emphasise the biggest single cause of disappointment for people buying telescopes is a lack of knowledge of where to look to see some of the delightful objects which are up there.

To enjoy the hobby properly it is vital you first learn how to find your way around the sky. One of the best ways to do this is to arm yourself with a simple star chart, a comfortable reclining chair and, if possible, a pair of binoculars. Any old pair will do, but 10x50s will be ideal. They need to be light enough you can hold them steady, but large enough to magnify well. You will be amazed at how much you can see, so spend a few hours browsing the sky and generally becoming familiar with the constellations.

If you then move on to a telescope you will be much more likely to continue using it, and not consign it to a cupboard in disappointment.

I end this edition with advance notice of a spectacular event that will be visible to all of you on the night of March 3. On that evening there will be a total eclipse of the moon, which occurs when the shadow of the Earth, cast by the sun, covers the full moon. You should be able to see definite signs of the shadow on the moon by about 10:15pm and by around midnight the eclipse will be total. You should be able to see an eerie, shadowed moon, which sometimes appears red in colour. The eclipse will be effectively over around 2:30am, which is when the last of the shadow finally leaves the moon.

Why not have an eclipse party? Invite some friends, prepare some food and sit outside under the dark skies to follow this exciting event. 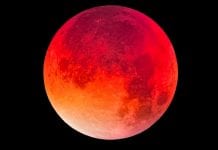 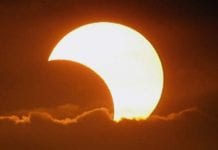 Gibraltar gets a glimpse of the world’s largest superyacht