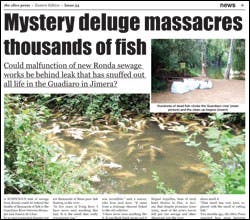 Did sewage kill thousands of fish in Ronda river?

AN investigation has been launched into the “ecological disaster” that killed thousands of fish in a Ronda river.

The public prosecutor believes a crime against the environment was committed with the leak into the River Guadiaro after heavy rainfall in September.

The probe has been launched partly in response to the “passivity” of the bodies responsible for investigating the incident that caused the death of over 10,000 fish.

The Olive Press revealed how a mystery leak from Ronda’s new sewage works could have been the cause of the incident (Mystery deluge massacres thousands of fish, issue 34).

We reported how a large unprecedented glut of thick black material, apparently sewage, entered the river near Hotel Molino del Puente on the morning of September 13.

While none of the local newspapers took any interest in the matter, we later reported how environment inspectors were twice refused access to the new sewage plant in the days after the leak.

Now, mayor of Jimera de Libar Maria Teresa Dominguez and provincial boss for the PP party have forced the courts to act.

The town hall sent an independent report undertaken by a local vet, which indicated that the cause of death was by suffocation due to the total loss of oxygen in the river.

The courts will now need to decide if this leak, which killed 100 per cent of the river life in the protected Lugar de Interes Comunitario (LIC) was caused by the sewage works or a chemical leak from one of the small factories or farms alongside the river.

The head of Malaga’s environment department, Ignacio Trillo, has also been asked to investigate the incident in detail.