DERELICT and shattered, the dreams of many Britons have been left in ruins after they were forced to wait four years for their promised home in the sun.

Some also fear they have lost their 23,000-euro deposits placed on property in the Zoco complex in the hamlet of El Golco in la Alpujarra.

Agents Palmera Properties had initially insisted the two-bedroom apartments in phases 4 and 5 would be ready for 2006.

In a series of emails seen by the Olive Press, buyers were promised apartments from 1 to 59 would be ready in June and 60 to 80 in January of that year.

The completion dates were later delayed more than 12 months, with half promised in April and the other half in July of this year.

However as our photographs show, when the Olive Press visited Zoco in October the complex was more like a building site than a luxury development.

One local resident, who lives in the completed phase 1, said no work had been done since the spring.

“Those who have bought there have lost everything,” she said. “Only ghosts will live there.”

Building materials such as bricks and cement lay strewn around and weeds come out of every crack.

Peering through the holes in the walls, the half-finished homes are still in need of considerable work.

Now, worried buyers are demanding their deposits are returned and Palmera Properites is refusing to give an explanation for the delay in completion.

It is estimated the lost deposits could reach hundreds of thousands of euros.

Buyers also complain the company should have organised security for the deposits, which under Spanish law they are obliged to do. 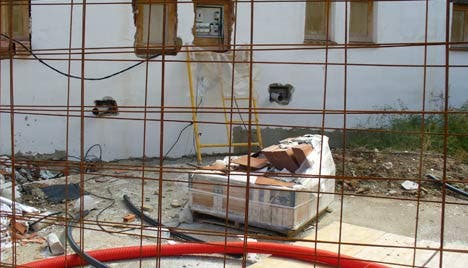 “We used their lawyer and we were not offered any banker’s guarantees that would have secured our deposit,” Martin Hewitt told the Olive Press.

The 52-year-old customs officer from Hull put down a 16,000-pound deposit in April 2004 on what he called his “dream holiday home.”

“Palmera Properties has lied to me. When it became obvious my home was never going to be finished, I was promised my money back within three months. But this never happened.

“What was my dream home is only one third built and is missing basic services like electricity and that is how I expect it to stay,” said Hewitt, who planned to use the apartment as a base to explore the nearby Sierra Nevada mountain range.

Hewitt insists he was convinced by Palmera Properties to use a lawyer affiliated to the company.

He also claims this lawyer offered him no legal help instead acting in the interests of the real estate company.

It is a similar story for shopkeeper Jemma Paish. The 42-year-old placed a deposit of 23,000 euros on a two-bed apartment in June 2004.

What was to be her holiday home, it is now nothing but an empty shell.

“I feel that I was taking a risk buying off-plan but I was reassured this was common practice. Initially I had regular contact with Palmera with regular photographic updates on the development. But over the past year this has completely stopped,” she said.

“I was told it was better to use a lawyer recommended by Palmera, but this is something I regret doing.”

Despite regular telephone calls and several email requests to offer the company a right to reply, Palmera Properties refused to comment.

“When buying something as expensive as property you need a lawyer who you can be certain is working for you and you alone.

Estate agents have an obvious incentive to recommend lawyers who will not cause problems with thorough legal searches.

“You are asking for trouble if you use a lawyer recommended by an estate agent,” he said.

Mark Stucklin is the Spanish property expert for the Sunday Times and runs www.spanishpropertyinsight.com – a property information website.