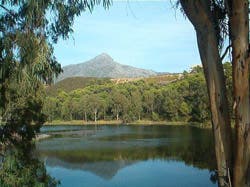 A CAMPAIGN to save a local beauty spot near Marbella has proved successful… and all because of People Power.

As the Olive Press reported in March, hundreds of protesters took part in a demonstration against plans to allow development at Lago de las Tortugas.

Tortoise Lake, as it is known locally, largely escaped the wide-scale development of Nueva Andalucia in the nineties.

But at the same time it suffered from the lack of municipal investment, and became used as an impromptu BBQ area, camp site and rubbish dump.

Following a series of protests organised by PINSAPO, Marbella town hall now intends to transform the lake into a nature zone.

Under new plans this would include a children’s play area and information panels about the wildlife in the area.

No new development will be permitted.