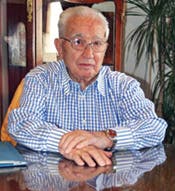 THE last Granada-born survivor of Nazi concentration camps has died.

José María Villegas, 91, passed away during his sleep at his Baza home.

A committed trade unionist and socialist, Villegas fought against General Franco’s military uprising during Spain’s Civil War. He was stationed in Barcelona, to where he had travelled from his Caniles home to find work as a carpenter.

He fled to France after the eventual fall of the democratically-elected government and became a member of the Resistance that battled against Nazi occupation during World War II.

He was captured and sent to the Buchenwald concentration camp. There, he was subjected to the brutal regime of the prison guards.

Following his release by Allied Forces in the final days of the conflict, Villegas returned to France to continue his fight against Franco.

He led a band of guerillas during an armed raid on his summer residency, the Pazo de Meiras mansion in Galicia. The dictator, however, was not at home.

During his first period in France, Villegas famously saved the life of the man who went on to become leader of that country, Vincent Auriol.

According to claims, Auriol – then also a resistence fighter – found himself held at gunpoint in a bakery by police officers, sympathetic to the Nazi occupation.

Villegas, seeing his friend in trouble, managed to shoot two of the policemen, with the others fleeing.

“He died at home, continually dreaming of social revolution,” said a spokesman for trade union CNT.