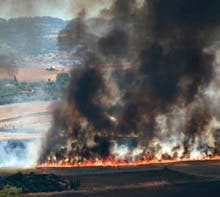 Soldiers called onto the streets in battle with firebugs

THE army has been called in on fire watch after a string of blazes were lit near Ronda.

Soldiers were ordered to keep an eye out for pyromaniacs, after four fires were apparently started deliberately around the area.

Two fires in particular near Jimera de Libar and in Cortes de la Frontera, are being treated as very suspicious.

This week a youth was arrested and questioned over the fires, which were apparently lit at up to four points on the road between Benaojan and Cortes de la Frontera.

It is alleged that the 20-year-old even returned to the scene later to relight one fire.

In total four fires destroyed 25 hectares of woodland in just one day.

Under an agreement already in place between the Ministries of Defence and Environment dozens of soldiers from the nearby Legion barracks in Ronda have been enlisted to fire watch.

Jimera mayor Maite Dominguez was pleased with the move and is convinced that the series of fires started in the Guadiaro valley were deliberate.

One fire in the Canteras area of Jimera destroyed 15 hectares of woodland and took a day to get under control.

She said: “Everyone in this area thinks that these fires are the work of pyromaniacs and they are being investigated as such.”

So far 13 people have been arrested in the Malaga province in the last few weeks for deliberately starting fires. It brings the total to 26 this year.

Another fire in Casares has been blamed on a spark from an electricity supply cable.