IN total there were over 400 women and at least 40 children. They had been mostly lined up against the wall and executed at point blank range, just like their husbands, sons and lovers. Tipped into a series of quickly dug holes, it came as a a huge shock at first. We soon realised that couples were often executed together, or the women had been seized as the next best thing when their Republican loved ones could not be found.

I spent far too many painful hours sifting through the detritus of so many tragic, broken lives. In what could be Spain’s largest mass graves from the Civil War, I frequently found objects such as combs, spectacles and money (both republican and nationalist), as well as gold teeth, medallions – I found one of the Virgin del Carmen – pencils and leather boots. The list was endless.

‘Repenters’ were buried in the cemetery, while the rest were dumped

To-date 2,200 bodies have been exhumed at San Rafael cemetery on the outskirts of Malaga. Finding that 20 per cent were female was shocking, finding children even more so. But on close scrutiny of the records we found out that when someone was taken prisoner often his whole family would set up home around the prison, leading to outbreaks of cholera (the biggest was in 1938) which killed many children.

Malaga has had two main cemeteries in use since the beginning of the 19th century. The first, San Miguel, was mainly for the well-off bourgeoisie merchant-class (the Heredia, Larios, Reding families for example) while San Rafael was for everyone else.

Until the 1930’s San Rafael had been the smaller of the two. But that was when the Civil War wreaked chaos and suffering across Spain and a big expansion was needed to intern the “new burials” as they called them.

Those who ‘repented’ were buried in the main cemetery, while the rest were dumped in the Civil or San Francisco patios, as they are known.

I spent most of my time working on the San Francisco patio last summer on a placement from university.

Using documents from the time it was at first believed that we were looking at around ten mass graves at San Rafael, but after a year that figure had risen to 18 and it is now thought that there might be up to 30. In fact the number of people buried in mass graves here is thought to be around 4,800 in total, making it almost certainly the largest mass grave in Spain. 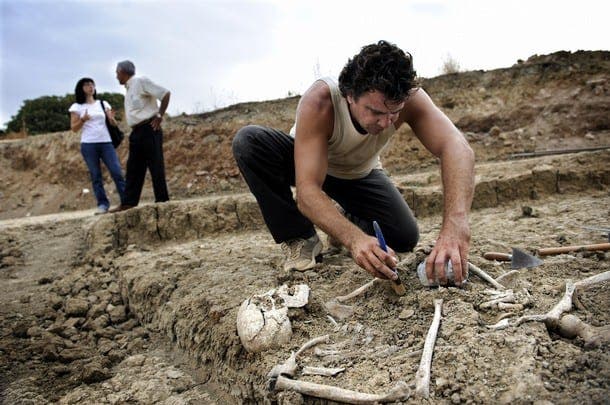 We know how many bodies there are in the former cemetery largely thanks to the work of Francisco Espinosa, who has spent years sifting through the prison records kept in the Historic Archive in Málaga.

He has a long list of who is supposed to be where and who has gone missing. All the archaeologists have to do is find them.

That, of course, is a lot easier than it sounds. As the cemetery was mostly demolished a number of years ago when a new one opened on the other side of town.

The San Rafael site was planned as a new fair ground and thanks to the great fore-thinking Celia Villalobos’ municipal government it became a general rubbish dump, showing little respect for the dead.

This means that the north end is 15 metres higher than it should be.

You can still see the tops of some of the old palm trees poking out from under the new mounds of earth. This means that plenty of the graves are some 20 to 30 metres down under the rubble and making electro-magnetic surveys of potential bodies below almost impossible.

Many of the findings have therefore had to be done by intuition and asking any remaining family members if they remember exactly where their loved ones were buried.

The whole process of execution is thankfully well recorded in the prison records. They normally start with the incarceration of the prisoner, to his (or her) transfer via lorry to the cemetery, where they were often ordered to dig a hole where they were later buried.

As one old lady told me: “They were led like swine to the slaughter”.

There were, of course, many stories among the dead. And a number of those found were not from Malaga at all. There was for example the General Secretary for the Communist party in Mijas, a poor farmer who was given the job because no-one else wanted it.

Most chilling of all, some bodies have been found with their hands crossed behind their backs, testifying to the fact that many prisoners had their hands tied when shot.

But strangely some of them seemed to have rust around their wrists. This, as it turns out, was after the arrival of a new Guardia Civil lieutenant from Sevilla, who had considerable expertise on the matter of executions, and discovered that some of the prisoners were able to escape by untying their bonds. He put a stop to this by tying their wrists with metal wire.