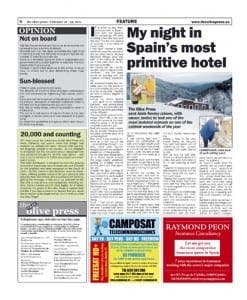 BEING someone who likes holidays involving sun loungers and pools with a bar you can swim up to, I was less than enthusiastic about having to review ‘Spain’s most primitive hotel’ in January.

I’m just not an outdoor person, and lighting fires, chopping wood and hanging around in the cold is not something I relish, to say the least.

So when the Olive Press gave me the opportunity to luxuriate at a five star spa hotel on the Costa del Sol I jumped at the chance. Much more my cup of tea.

So off I trooped to the La Cala hotel and golf resort between Marbella and Fuengirola, with fellow reporter Wendy Williams once more in tow.

I didn’t care that the out-of-date blue sponge-effect walls of the reception were reminiscent of the 1980s or that it sat slap bang on a golf course.

All I cared about was getting pampered, as opposed to shivering myself to sleep in a freezing cold goat shed with only a head torch for light.

Within a minute of arriving in the room, Wendy and I had slung on our puffy white dressing gowns, with matching slippers. We immediately opened our 2.99 euro bottle of Mercadona cava and sat on the terrace looking at a huge expanse of, er, fairways.

Once I had worked out why there were no buckets and spades in the sandpits, I discovered the huge TV with English channels – hurrah – and a mini bar… to keep the cava cool!

Then I heard a knock at the door and instinctively jumped behind the sofa, before realising it was just the hotel manager bringing us a bowl of fruit. Amazing. On my trip to the ‘primitive hotel’ in Huelva, all I had to eat was half-cooked slabs of pork…so this was definitely an improvement.

I lay back with a complimentary copy of The Times and tried (and sadly failed) to get Wendy to feed me grapes on my huge double bed. After a little snooze I headed down to the fabulous Caracola Spa.

Named after Roman Emperor Caracala, who opened Rome’s largest spa, it is trying to achieve the same fame with its extensive and luxurious facilities and it’s not doing too badly.

The sheer choice of things to try was overwhelming, but luckily I was offered what is called a ‘Caracala Spa Special’, launched to celebrate the spa’s fifth anniversary.

It started with something I thought better suited for hippos. The so-called ‘thermal mud envelopment’ left my skin feeling great, but it was embarrassing not knowing exactly which items of clothing to leave on and which to remove.

The next embarrassing moment came when I was covered in an orange infused oil and Alex attempted to massage my feet which made me scream with laughter. So no foot massage.

Finally I was taken to the dry flotation room.

I had no idea what was about to happen but it was without doubt one of the most comfortable and weird things I have ever experienced. 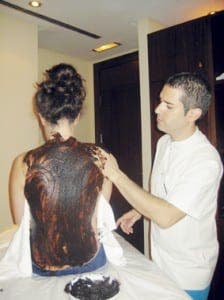 I had the Cleopatra treatment, which meant being covered head to toe in aloe vera and goat’s butter and then suspended in a warm water wrap. I was completely cocooned apart from my head sticking out which served as the perfect hangover treatment.

The next day, in a bid to exercise off my huge buffet breakfast, I dived into the exercise pool and did about two lengths before deciding the outdoor jacuzzi looked more fun.

Unfortunately no-one had explained what the buttons were for and in a bid to get the bubbles going again I pressed as many as I could find with one of them turning on a huge nearby water fountain, under which a large group of men were standing.

I frantically started pressing lots of buttons to stop the gushing water. Nothing worked.

Then one of the men casually swam over, pressed another button and it stopped. I said sorry and slowly swam away before trying something called the ‘igloo’.

As you’d expect the igloo is cold and I still have no idea what it is for, but it was immediately reminiscent of the primitive hotel up in the mountains.

I quickly jumped out and went to the sauna to warm up.

To sum up, there’s no doubt my spa etiquette could be improved, but overall it ended up being the perfect antidote to my weekend spent shivering in January.