I WALK in to find him poring over Richard Kay’s royal-fixated gossip column in the Daily Mail.

Once a regular fixture on the society page – thanks to a five year affair with the late Princess Diana – it somewhat surprises me that James Hewitt goes near the paper.

After all, it was this bastion of Britishness that relentlessly parodied and poked fun at him ‘for at least 10 years’, by his own reckoning.

The Cad, The Bounder… he got the lot dumped on him, after an exposé caught him apparently trying to sell a cache of love letters he had received from the so-called ‘People’s Princess’.

“It is one of the reasons I moved to Spain,” the 53-year-old explains over lunch at his popular Marbella restaurant Polo House.

“I was escaping England and needed to start somewhere afresh,” he continues. “There were a lot of bad things back home that
I am still trying to forget. Time is a great healer.”

Still suffering from the after effects of the flu – “nothing a hot toddy couldn’t sort out” – he has been left to look after a friend’s dog Molly, a sniffy-looking lapdog straight out of Men in Black and he is not entirely amused. “I keep worrying she is going to run out onto that road and get squashed,” he says, before thrusting her to one of the receptionists, in something of a flurry.

It has been nearly five years since Hewitt left England, following a string of TV programmes and a slew of newspaper stories about his gallivanting.

His downfall had all begun after he reportedly solicited £10million for his collection of around 60 perfume-laden missives, which he had received during his affair with the former wife of Prince Charles.

The former cavalry officer quickly became one of the UK’s biggest hate figures, not helped when he went on to collaborate with Anna Pastanak on a book about the princess’s life.

Now well ensconced on the Costa del Sol and fronting a business that has proven highly popular, it is a time he is now hoping to forget.

“For 10 years I was stalked by the press,” he explains, sipping gingerly on his double expresso. “I eventually realised I was never going to be left alone in England and my life had become a huge pantomime in order to sell newspapers.

“I do take the blame in part, of course, but I was being used and things got out of control.

“I decided I was going to do something about it. I didn’t want to become a bigoted twisted fool and I couldn’t let them win, which is why I left England.”

It began the next chapter of his life, one where he has largely been left alone and where he has been able to forge a lucrative collaboration with one of the coast’s premier restaurateurs Ram Nandkishore, whom he describes as his ‘great business mentor’. 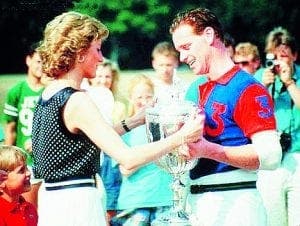 Part-financed through his own savings – and very much his idea – Polo House, which has been open for two years, is a classic colonial-style redoubt. Airy and sumptuous, the restaurant is filled with imported dark wood from the Far East, with polo trophies and pony pictures dotted around – although, unsurprisingly, no copies of the famous photograph (below left) showing a blushing, giggly Diana handing Hewitt his winning polo trophy.

Extremely popular in the evenings – and particularly for Sunday lunch when it is not uncommon to have up to 100 diners – he can count Marbella mayoress Angeles Muñoz as a regular, as well as Mark Thatcher and Status Quo’s Francis Rossi… or at least until he had a blazing row with his girlfriend there a few months ago.

In particular, it is one of the few places on the coast, where people dine without thinking about budgets, believes James.

“I really felt Marbella had the potential for this sort of place when I moved here,” he explains. “I have eaten in so many places around the world and know a bit about wine. Quite frankly, there was not much else I could do,” he quips. “I don’t really work here either. I just hang about, march in and out. To be fair I have not really worked in my life before.”

It is this self-effacing side – and his obvious good humour – that immediately makes one warm to the former soldier, who went on to lead a squadron of 14 tanks and 150 men into battle during the first Gulf War.

“A sense of humour is the most important thing in life. It is vital to bring happiness and joy to people’s lives. I hope I do that,” he says.

A sense of humour is the most important thing in life. It is vital to bring happiness

Born in 1958 in Kent to a Naval officer father, he joined the Brigade of Guards at the age of 20, before heading to Ireland and later Iraq during Desert Storm.

“There were some pretty hairy moments and thank God we got through it with only three injuries during five days of fighting.

“You learn a lot about yourself in situations like that. There was a plethora of emotions. Fear, worry and euphoria and then at the end a steady calmness.”

It is this sort of state that he believes he is finally getting to in his life, down here in southern Spain.

By his own account his routine is a pleasant one. He pops into the restaurant when needed around five evenings a week and spends the rest of the time playing tennis and helping his partner Ram expand his Costa del Sol business empire.

“I have grown to love the area since I arrived here,” he explains. “I like the different pace of life and of course the weather. It takes a long time to become accepted but I am starting to feel part of the community.”

Indeed, he is so taken by the coast that, contrary to rumours, he is actually thinking of settling here more permanently.

“I am in fact selling my place in London and I will finally have some money to buy a bigger place here.

“I could not see myself ever moving back to London. I like the countryside and going to nice pubs or shooting or hunting foxes and anything else for that matter than annoys the politically correct lobby.”

It is a frequent theme of our conversation, which is peppered with attacks on the former prime minister Tony Blair, who he opposes in almost every way. A staunchly dyed–in–the–wool Conservative, there is a clear sense that with a Tory government in power back home, he might actually get on quite well in Blighty now. Indeed, there is even talk of opening a franchise of Polo House in London, in addition to Beijing and India.

“I hope I am no longer hated back home and people can see me for my successes over here,” he says. “Ultimately, I think the whole crisis I’ve been through brought about a lot of good,” he estimates. “I was right out of my comfort zone and there was a lot of soul searching. It was uncomfortable and I have had to work hard to improve myself. I now just want to be myself and I believe that I am a pretty decent chap, after all.”

Simon Wade - 25 May, 2022 @ 11:45
AN EXPAT octogenarian discharged himself from Torrevieja Hospital after sitting a total of 20 hours waiting for attention. Brain Snell, 84, had suffered a fall...