WITH the general election fast approaching, it won’t come as news to many that Spain’s economy is buckling, unemployment figures are soaring and town halls are up to their eyeballs in debt.

At the start of the recession, the Socialist government tried to get things back on track with a range of relatively soft measures, such as using celebrities to endorse tourist spots.

But as things worsened, then came the pension freeze, the five per cent cut in functionarios’ salaries, the scrapping of the 2,500-euro ‘baby cheque’ – as well as the lifting of the retirement age from 65 to 67.

These measures have directly affected hundreds of thousands of Spaniards, and prompted a general feeling of dissatisfaction not only with the way the crisis has been handled, but also with the country’s current system of two-party government.

The overbearing whiff of political corruption, a lack of transparency and Spain’s inability to provide employment for its people have not helped.

The 15-M movement (coming from the date it formed on May 15, this year) has staged demonstrations throughout the country, attracting an estimated eight million Spaniards – so far – to stand up and be counted.

And despite the opinion polls predicting that PP leader Mariano Rajoy will win the upcoming election with an absolute majority, few people are expecting drastic change.

Indeed, the huge levels of unemployment and a shortage of money in the government coffers is unlikely to change fast.

If anything, even harsher austerity measures are likely to come in, meaning tighter budget cuts, which are already biting hard in Andalucia.

The main issue must certainly be unemployment, which in Andalucia is currently nearly 31 per cent – nine per cent over the national average.

This translates to around a million Andalucians not officially earning a wage, and it is being felt hard across the region as winter sets in, the fuel bills rise and the job prospects dry out until the tourist season kicks in again at Easter.

Next, there are the indebted town halls of the region, which have caused a number of problems as they try to scrimp, save and pull in money from wherever they can.

Dozens of them are effectively bankrupt, including Gaucin, Estepona and even Jerez.

Granada residents (as well as those in San Pedro with their underpass) will be well aware of the city’s unfinished metro system (left); a project which ground to a halt after its workers stopped being paid in January.

Jointly paid for by the EU and the Andalucian regional government, the new line – more of a tramway or a light railway than a metro since just two of its 26 stations will be underground – is set to link the centre of town with Armilla, Albolote and Maracena.

But its completion is now not expected until 2013, and local businesses have complained of losing money due to the lack of through traffic as well as having to put up with a three-mile-long eyesore on one of the city’s main thoroughfares, Camino de Ronda.

Meanwhile, builders in Granada have joined voices to warn that they are close to bankruptcy due to the non-payment of bills from the regional government.

“If they do not pay us, we cannot meet our payment obligations to the thousands of freelancers and contractors to whom we owe money,” said Ignacio Diaz, general manager of building firm UCOP.

But Granada is not the only town hall which has not been paying its workers.

Limasa, cleaning contractor for Jerez town hall – which has a debt of 987 million euros – failed to pay salaries to the 200 women that clean 47 of its schools in September and announced they would not be paid in October either.

Key to this example is the fact that, since none of the cleaners earn more than 800 euros a month and many are on part-time contracts, they represent a particularly vulnerable section of society – a section that has already experienced an entire year of wage instability.

“My daughter has to take photocopies of her schoolbooks because I can’t afford to buy them,” said cleaner Ana Jaen, who supports four children as well as a long-term unemployed husband, and who had not been able to pay her electricity or mortgage for two months even before she was denied her 775 euros by Limasa.

She and the rest of the cleaners went on strike for three days, waving banners, locking themselves in the Limasa offices, stopping traffic and refusing to clean again – a decision affecting almost 15,000 students – until they received their salaries.

Meanwhile in Coin, residents were plunged into darkness after the town hall failed to pay its electricity bill to supplier Endesa.

Back in June, Endesa had warned the town hall that it would cut off its supply if it did not cough up the 400,000-euro bill in its entirety.

Unfortunately for those living in Coin, the town hall was only able to provide a portion of the money owed and the supply to several of the town’s street lights was turned off – including those in the cemetery and in public areas in two housing estates.

“This debt was generated by the previous council and now we have to pay it,” grumbled mayor Fernando Fernandez, who labelled the electricity cut as ‘unfair’.

His town hall is anything but the only one, with dozens of others threatened with the same issue.But as well as failing to finish planned projects, trying to get out of paying salaries and not paying their bills, Andalucia’s town halls have been racking their brains to find more original ways of generating income. 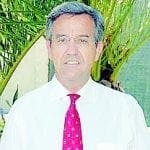 If you have driven past Estepona on the A7 motorway recently, you might have found yourself in darkness because of a money-saving scheme thought up by its Conservative mayor, Jose Maria Garcia Urbano (left) – whose coffers are in debt by a total of around 300 million euros.

Urbano decided that since the A7 is a national highway, it was not, in fact, his department’s responsibility to pay the electricity bills but that of the central Ministry of Public Works.

So he announced he simply would not be paying the bill anymore, prompting the Ministry to switch off the lights.

Following Urbano’s example, Manilva, Marbella and Fuengirola are all planning to claim back the 11 million euros they have spent on lighting up the A7 for the last 15 years.

“Somebody had to speak out and say that this was not on,” said Urbano, whose other austerity measures included getting rid of the town hall’s official cars as well as the 150 mobile phones its workers were using.

Meanwhile Benalmadena town hall, whose debt is estimated at 170 million euros, reckons it can claw back 12 million euros by giving small businesses and tourism a boost – as well as introducing a number of measures to clamp down on tax cheats.

Mijas town hall, too, has announced a plan to chase up the 1,243 taxpayers – many of them expatriates – who owe 1.24 million euros but have so far slipped under the net because of administrative reasons.

This has prompted criticism that Mijas town hall is deliberately targeting foreigners in a bid to replenish its empty bank account.

“I think it is discriminate,” Frank Bowles, 79, a retired journalist, told the Olive Press.

“We all know that people have to pay taxes, but the point is that they have always thought that we, the foreigners, are rich and we can help to pay for all the poor Spaniards, but that is not correct.”

Perhaps the best scheme of all, however, is one thought up by Jerez town hall, which has invented a cost-effective way of finding new stock for their flagging fleet of police vehicles.

Rather than forking out funds they do not have on new cars, the town hall will instead be adapting cars seized by the Guardia Civil in drugs raids.

Nine vehicles have already been reserved for their new lease of life – although the town hall has made it clear that this is a temporary measure.

One might say that this makes perfect sense. After all, it’s one of the few changes that will not have negative effect and is actually making a good use of something whose original function was not so savoury. One thing’s for sure, it beats failing to pay the school cleaners hands down.

Only time – and perhaps a new government – will tell if things will improve for Andalucia’s town halls and those reliant on their services.

Until then, perhaps we shall all have to watch out for those tell-tale signs that the town halls are having problems, be it an unexpected blackout, a tax bill on the door mat, or a copper driving a Merc with blacked-out windows.