WATCH out chaps, for next Wednesday you could be in for a big shock.

As far as romantic folklore goes, Febuary 29 is the only day of the year – or actually four years – when women can pop the question.

And, as that date only comes around on a leap year there will be plenty of women who have been planning the proposal with a fine tooth comb.

The tradition is said to herald from Irish saint St Bridget, who complained to St Patrick about women having to wait for so long for a man to propose.

So, being a generous man and lover of romance, it is said that he agreed to give her the one day for women to propose.

However, when she actually proposed to him on that fated day the following year he turned her down, instead offering to give her a present of her choosing (she opted for a silk gown) and ruling that that would be the forfait for any other men going forward.

So it will either be a very romantic – or expensive day – for anyone deciding to turn down their lover on that day.

Should you end up being one of the romantic pairs, then the next question will be where to tie the knot.

Well Gibraltar is, without a doubt, the Las Vegas of southern Europe and thousands of romantics have made the trip south to tie the knot there over the years.

Quite a number of them are famous, few more so than the man behind romantic ballads She Loves You and I Want to Hold Your Hand.

John Lennon and Japanese wife Yoko Ono both said “I do” on the Rock in 1969, before famously spending a week in bed in Canada. The couple managed to tie the knot in secret.

Since then there has been a steady stream of lovebirds taking advantage of the years of history, siege and intrigue, which has given Gibraltar its passionate spirit.

Each year hundreds of couples fly in from all over the world to get married or simply renew their vows.

But Gibraltar’s appeal as a romantic sojourn is not new. During the 1950s Hollywood stars Lawrence Harvey and Margaret Leighton were one of the first high profile couples to marry on the rock.

Many other celebrities, including Sean Connery (twice) and Sir John Mills, followed in their footsteps and most recently Status Quo rocker Rick Parfitt married his missus on the Rock.

But there are a few things that need sorting out in advance, if you wish to get married in Gib.

You will need, perhaps obviously, your passport, as well as your birth certificate, a document of non impediment, proving you are free to marry.

Due to popularity it is also advisable to apply early for a suitable date at the Register Office in Gibraltar.

A number of experienced wedding planners can be found to help you through the tricky proceedure.

One of the best is Sam Dimond, 28, from All Things Nice, who has her own shop selling all range of wedding dresses, suits and paraphanalia in Ocean Village.

Her company works closely with the register office and other venues around the enclave, including Mons Calpe, one of the most amazing places to get married in Europe, sitting at the top of the rock at 412 metres.

You can also now get married at the Alameda Botanical Gardens, with the Rock as a backdrop, or in Ocean Village.

“There are a number of good places to get married now and the wedding photos and almost certainly the weather will be perfect,” says Dimond, whose shop also rents out suits for other occasions.

“We get quite a lot of last minute weddings and June is the busiest month, although May and July are pretty busy too and September is a lovely time.” 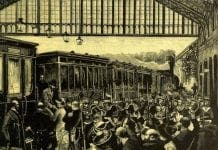 Give war a chance – a Spanish village at war with France 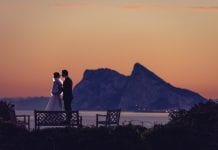 A simply stylish wedding in Gibraltar 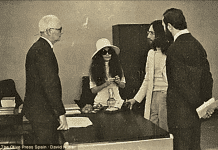