JEREZ Town Hall has scrapped €15 million worth of bonus payments to civil servants in an attempt to tackle debts of €1,000m.

Workers who previously received a reimbursement of 40% for teeth fillings, contact lenses and hearing aids will now receive nothing.

A €1,200 bonus awarded to those who have served 25 years has also been stopped, and newlyweds can no longer expect to be given the sum of €160 towards the honeymoon.

On average, employees who earn over €30,000 per year in Jerez will see their salaries reduced by 10%.

The step is seen as urgent for a town hall which this year did not have enough cash to pay its workers their normal salaries for four months. 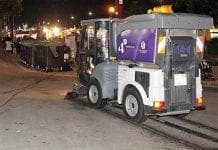 Woman gets €37,000 payout after slipping on soapy pavement being cleaned by town hall workers in Spain’s Andalucia