IN the early hours of a Friday morning in late September the lives of scores of expats and Spaniards alike, were changed forever.

Persistent rain had left waterways throughout parts of Andalucia dangerously close to bursting point and as dawn broke, so did the river banks.

Cars were washed away and properties consumed by torrents of water up to two metres deep as residents were forced to flee their homes.

The devastation left behind by the floods caused thousands of euros of damage which could take years to recover from.

But far from being an isolated incident, the floods – the worst in Andalucia for a decade – are just the latest example of extreme weather events to affect Spain.

Barely a month before the rain, Malaga suffered what officials described as ‘the worst fires in living memory’.

But while this was found to have been caused by a bonfire, many others across Andalucia were due to the weather, with a total of over 12,000 hectares destroyed by fire in Andalucia this summer, an area over six times bigger than in 2011.

It represented the worst blazes to affect the region since 2004 and coincided with extensive fires in other Spanish regions, including Valencia, Cataluna and Tenerife.

But is the adverse weather simply part of a natural cycle or is it evidence of a growing trend of extreme weather events triggered by the effects of climate change? 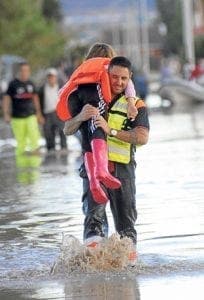 While some of the fires have been blamed on arsonists, the almost unanimous belief of the world’s leading scientists is that the latter is responsible.

And while global warming is a worldwide concern, it is a widely held belief that Spain is among the countries most affected by the phenomenon.

A report published by environmental group Greenpeace in 2009 stated that Spain is more affected by climate change than any other country in the EU.

It argued that sea levels around Spain are rising by 3mm each year and that the country will be affected by average temperature increases of 1.5 degrees by the end of the century, more than double the global average.

Some regions are even predicted to rise by as much as six degrees by the end of the century.

The European Environment Agency (EEA) has also expressed its concern for Spain, claiming the country is highly vulnerable to climate change.

Among the adverse effects predicted by the EEA include reduced water resources, erosion, and human health issues related to extreme weather.

Most notably, it states that it expects Spain’s beaches to shrink by an average of 15 metres by 2050 due to rising sea levels – an event which could have serious consequences for the tourism industry.

The threat of global warming has also caused concern within Spain’s €2 billion wine industry, with rising temperatures forcing producers to move to the cooler climes of the Pyrenees.

But even in the mountains there is no escaping the effects of climate change.

Spain has lost 90% of its glaciers in the past century, with the remaining ice expected to disappear completely within a few decades, according to the environment ministry.

While the Pyrenees were covered by 3,300 hectares of glacier when records began at the end of the 19th century, now only 390 hectares remain.

Overall, Europe’s glaciers are believed to have shrunk by a quarter since 2001, something which could lead directly to increased drought as rivers dependent on seasonal ice-melt dry up.

The damaging effect of drought is seen as one of the key factors in the spread of a process known as desertification – another process currently afflicting Spain.

Desertification is the process of fertile land being transformed into desert, and while a number of factors contribute to this, drought is arguably the most significant.

The problem is deemed to be so serious that the United Nations has held a number of conferences to discuss the issue and warns that 6% of Spain’s soil has already eroded irreversibly.

Spain’s environment ministry adds that nearly one-third of the country faces a ‘significant risk’ of desertification.

But while all of these factors are clearly huge problems which need to be urgently addressed, what are the solutions, and how are they been implemented? 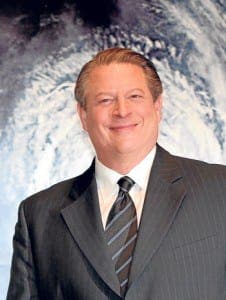 One of the ways in which climate change is being tackled in Spain is by adapting to it through the promotion of a more self-sufficient lifestyle.

As part of this process, Spain established the National Plan on Adaption to Climate Change in 2006, to provide a framework for tackling the issue.

The cities of Barcelona and Vitoria-Gasteiz have also signed up to an EU-funded adaption strategy aimed at helping cities become better equipped to deal with climate change.

Among the other cities to sign up to the initiative are Birmingham, Stirling and locally, most notably Gibraltar.

The Rock’s government is busy promoting its green credentials and recently received ringing endorsements from prominent environmental campaigners as the host of a Thinking Green conference.

Former US Vice President Al Gore told the audience during his speech that Gibraltar had an opportunity, through its steps to tackle climate change, to become a role model for the world.

Meanwhile Juan Verde, a renewable energy advisor to the Obama administration, went one step further by urging the Rock to become fully sustainable.

“You can’t do that in America because it would take decades, but here you could do it in a matter of years.”

At a more local level, a growing movement known as transition towns has been set up to help communities find ways of reducing their carbon footprint.

Adoption of the idea is on the increase and led to a conference being held in Marbella last weekend.

“The Transition Town Movement is a campaign to create more sustainable communities which reduce their carbon footprint and are less reliant on fossil fuels,” conference organiser Alejandro Cesar Orioli told the Olive Press.

“The movement intends to equip people with the skills to respond to the changing circumstances which diminishing fossil fuels will cause.”

Transition towns may only be one small piece in the jigsaw, with much more significant change required at government level in order to make a serious difference.

But they say even the longest journeys begin with a small step, and it’s clear some people in Spain have already taken it.

Even if that is little consolation to those who experienced first hand the effects of climate change, on that unforgettable Friday morning in September.