THE theft of a painting by Spanish artist Francisco Goya from Britain’s National Gallery has finally been solved.

Described as one of the greatest art heists of the 20th century, the case has remained shrouded in mystery for more than 50 years.

But the identity of the thief, who stole the portrait of the Duke of Wellington in 1961, has been revealed following the release of a confidential file.

John Bunton, the son of a retired bus driver from Newcastle, swiped the masterpiece (today valued at €2.4 million) after climbing over a wall and entering through the open window of the men’s toilet.

The 20-year-old confessed in 1969, four years after his father Kempton stood trial for the theft.

The painting had earlier been recovered from the left luggage office at Birmingham New Street station.

The 61-year-old Kempton Bunton was cleared of stealing the painting, but served three months for the larceny of the picture frame.

John Bunton, who has never gone on trial for the theft, claimed he stole the painting to help his dad’s campaign against pensioners having to pay the BBC license fee.

“He intended to use it as a tool in his campaign and that it should ultimately be returned to the National Gallery,” he said. 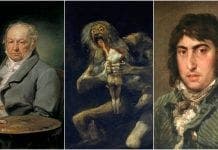