THE last known British survivor of the Spanish Civil War has died aged 94.

David Lomon, originally from Hackney, in East London, was one of 2,500 brave Brits who volunteered to fight against General Franco’s fascist army during the 1936 to 1939 civil war.

The war hero signed up to the International Brigade in secret in 1936 following a run in with Oswald Mosley’s fascist group, the Blackshirts, at the Battle of Cable Street, which took place just yards from his home.

At the time he was also a member of the Young Communist Party.

After signing up he fought in the battle of Teruel, which claimed 140,000 lives and marked a major turning point in Franco’s eventual victory. 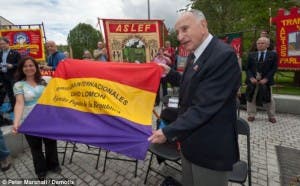 He was captured in 1938 and became a prisoner of war at a camp in San Pedro de Cardenos, near Bruges, enduring brutal beatings and starvation before returning to the UK.

Jim Jump, secretary of the International Brigade Trust, paid tribute to Mr Lomon and said: “He had a conventional life when he returned.

“He was not the type to boast about what he did.

“He was a lovely man; very polite; a classic English gentleman.” 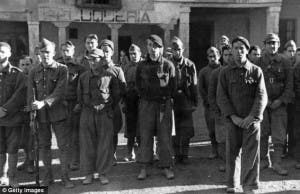 In an attempt to impose a fascist rule in Spain, with the support of Nazi Germany and Italian fascist leader, Benito Mussolini, Francisco Franco waged a bloody war against the government

Although the UK’s official stance was non-intervention thousands of British men signed up to fight, including writers George Orwell and Laurie Lee.