TWO men are being questioned in Marbella in connection to the disappearance of beautiful expat Agnese Klavina, according to sources close to the investigation.

The 30-year-old Latvian was last seen in Aqwa Mist nightclub with friends in the early hours of Saturday September 6.

Police were unable to confirm any details this evening, except that the investigation is still being carried out.

The ‘Find Agnese Klavina’ has reached 1,574 likes and is still being used to appeal for any information on Agnese, who  is 1.7m tall with blonde hair.

Posters were placed all over the Costa del Sol appealing for information.

When she was last seen she was wearing a multi-coloured halter neck dress and carrying a large white Louis Vuitton handbag.

A source said she was last seen in a car leaving the nightclub.

The men who have allegedly been are understood to have been in the same club on the night Agnese disappeared.

A source where she worked said: “She was a really nice nice and beautiful girl, but a party animal too and was always out.” 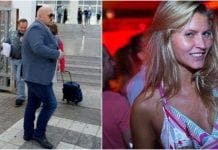