FORMULA One star Fernando Alonso may have found himself a team for next season but he looks set to be lonely at home.

Kapustina has not been spotted trackside since the F1 race in Abu Dhabi in September. Previous to that she had been at her partner’s side before and after every race.

The couple have also fallen silent on social media where they used to share tweets about one another.

Alonso parted ways with Ferrari last month and has now been unveiled as a McLaren-Honda driver for the 2015 season. 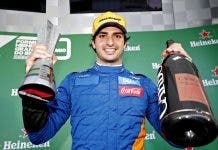 ‘Sadistic killer’ who stabbed German expat seven times in Spain’s Mallorca FIRST to be trialled with jury during Spain’s...