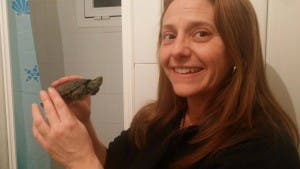 A BRITISH animal rescuer, about to release the first turtle she ever saved, is seeking the perfect spot for his freedom.

Mother-of-two Anna Cockell, from Sabinillas, has rescued and rehomed a number of cats, dogs and turtles since arriving on the coast in 2004. She currently owns one dog and six cats as well as Trevor.

“Trevor’s very special, he’s got a lot of character and loves people so I don’t want to put him anywhere where he could come hurtling out and hurt himself,” she said.

“I’d never had a turtle but he was being chased and about to be a seagull’s dinner when my son snatched him up first.”

Cockell said that Trevor has now taken to escape from his tank and ‘terrorises the cats, chases after them and confuses them’.

Once he even jumped off the fifteen-foot high balcony and onto a concrete floor, only to have his jailbreak thwarted by the fence he got stuck in.

For any recommendations on where Trevor could be released contact newsdesk@theolivepress.es