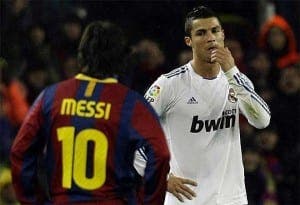 THE world’s most glamorous football match could be postponed next month because of a proposed La Liga strike over television rights.

Real Madrid and Barcelona may be forced to push back their March 22 match-up as other La Liga clubs are planning to protest over the way television rights are divvied up.

Clubs in Spain want rights to be sold in the same way they are in England and Italy, so that clubs share the profits more equally.

At the moment Spanish teams have to negotiate their rate individually, with Barcelona and Real Madrid receiving 12 times more from their rights than the lowest La Liga earners.

The Spanish government has so far refused to push through a law that would allow clubs to bargain for rights collectively.