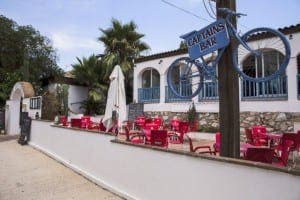 TWO British men have been arrested in connection with the death of a German following a bar fight.

Ingo Dewitz, 46, died after suffering two blows to the head and collapsing at Captain’s Bar, in La Cala de Mijas, shortly after midnight.

The two Brits are believed to have begun rowing with the victim after sitting down at an adjacent table, before one hit him twice in the head.

Witnesses claim they attempted to revive the victim, at first dragging him towards the door where he collapsed again, before sitting him down on a chair.

However, upon seeing his state they reportedly panicked and fled the scene in a vehicle with a British number plate.

Mijas expat Ross Moore, 30, was arrested the next morning, while a second Brit, who has not been named, was detained later that day.

Moore remains in Alhaurin prison, after a court appearance on Saturday, while the other man has been released on bail without his passport and must sign in at a court once a fortnight.