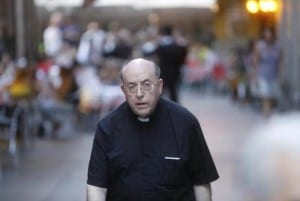 A LEADING Spanish priest has been accused of money laundering.

Jose Luis Montes (right) is being probed over millions of euros hidden away overseas.

It comes after Switzerland launched an investigation into investments made by the senior Madrid clergyman.

Dubbed the ‘priest to the nobility’ Montes is accused of misappropriating funds destined for aristocratic Madrid sisters Carmen and Blanca Roca de Togores.

It is alleged that he and his lawyer brother had been fiddling funds since 2004 to the tune of tens of millions of euros.

The funds were traced to a network of companies abroad including Credit Suisse, LB Swiss and Pictet, with businesses tracked as far away as Panama and Belize.