A FORMER lord mayor is taking legal advice after a British convict trashed and set fire to his Mijas apartment.

Ex-Bristol councillor Royston Griffey, 71, has lost thousands after his flat was rented out to one of the men, accused of killing a German in a bar fight in La Cala, in July.

He told the Olive Press he had rented his apartment in Pueblo Aida to Ross Moore, 30, in December 2014 after the Exmouth man fled the UK following an assault charge.

At the time, Griffey was unaware of Moore’s past and unwittingly rented him the two bedroom flat.

The former Bristol lord mayor feared the worst when he heard that Moore had been arrested over the death of German Ingo Dewitz.

And to his horror, when he visited the flat, he found it had been looted and, worse, set alight.

Furniture was burnt in the blaze, while the television had been stolen.

He had already been fighting to get the rent paid for the previous six months.

“He has completely ruined my apartment,” Griffey told the Olive Press. “It will cost me thousands of euros.

“I had no idea who this guy was when I let him my house, if I had done I would never have agreed to it. He already owed me over €2,000 in unpaid rental fees.”

Moore is currently being held in Alhaurin prison where he is awaiting trial. 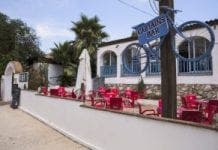 EXCLUSIVE: Brit arrested over Mijas pub killing is wanted in the UK