WITH over 320 days of sunshine per year, Spain is a hotbed for sun worshippers looking for a year-round tan. 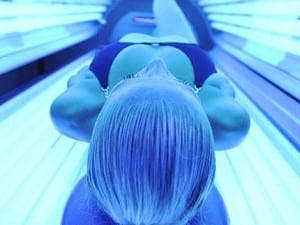 But according to one Spanish dermatologist, bronzing nature’s way is no longer enough. The nation has become addicted to tanning salons.

This bizarre habit, dubbed ‘tanorexia’, is booming in Spain, despite Madrid boasting 2,750 hours of sunshine per year, double that of London.

Jose Carlos Moreno from Spain’s dermatology academy (AEDV) believes it is an addiction.

The worst demographic afflicted by this ‘addiction’ are women and the under-40s who get their tan fix twice a week, minimum.

UV-emitting tanning machines have been officially classified as carcinogenic since 2012 but Brazil and Australia are the only countries to have banned indoor tanning beds.