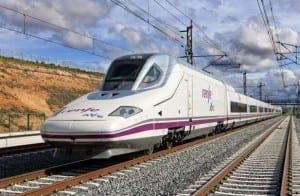 SPAIN’S trains are experiencing a travel boom with a massive 23 million people climbing aboard in the first nine months of this year.

Between the high-speed AVE and long distance services, the number of people travelling is up by 6.2% on the same period last year.

Spain’s air foundation AENA predicts 300 new flight paths will be opened over 2015, and 61 of them domestic.