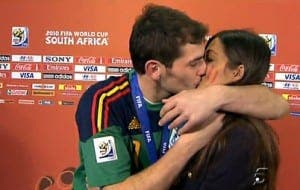 SPANISH goalkeeper Iker Casillas is set to have his hands full… not just with footballs but babies in the coming year.

The stopper’s girlfriend Sara Carbonero is pregnant again after giving birth to the couple’s first child in 2014.