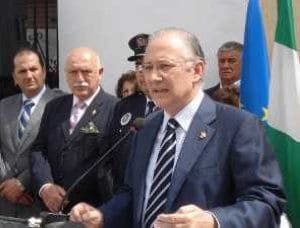 THE disgraced mayor of Alhaurin el Grande has finally stepped down after years of corruption.

Juan Martin Seron (right) finally accepted his days were numbered after a vote of no-confidence was tabled for this week by all rival parties, including the PP, PSOE and the IU.

He has been serving Por Alhaurin as a mayor since a ban from public office ended in 2014.

He was banned under the Casa Troya case for taking bribes for building contracts and was caught soliciting €122,000 from a builder in return for planning permission.