THE Olive Press team are celebrating after being crowned the best expat newspaper in Spain.

A worldwide poll of 27,000 expats by The Expat Survey Consumer Awards (TESCA) saw the The Olive Press newspaper voted best in Spain and second best in the world.

“Massive congratulations to the Olive Press,” said poll organiser Stuart Smith, based in London, “we have had engagement from all over the world from almost 30,000 expats in more than 109 countries, so it is a massive deal for you guys and a big achievement.”

The Olive Press is the youngest publication among the winners of the poll, in which tens of thousands of expats have been voting in for the last 12 months.

France’s Connexion, a paid for newspaper, which has been running for over two decades came first, while the Round Town News, based in Costa Blanca, came third. 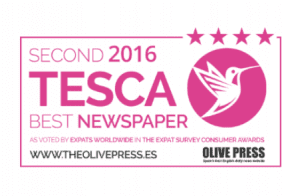 “The years of hard work have paid off and it’s a great moment for us as we approach our tenth anniversary, cheers to another ten years!” Publisher and Editor Jon Clarke said, “It’s nice to drink a bit of decent Spanish Cava to celebrate and finish a good week, this goes to all my hard-working team and our faithful advertisers.”