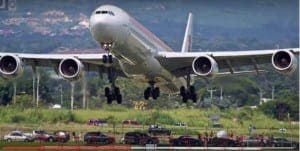 MALAGA’S controversial second runway has opened on earlier than usual this year.

The runway usually only opens in the summer to deal with the tourist hordes, but huge volumes of passengers arriving in spring have led to its early opening.

That’s the equivalent cost of €78m each day.

Last September a statement issued by the union for air traffic controllers – USCA – said the runway causes economic losses for the airport and often delays passengers.

The union said as increasing numbers of passengers use the airport with only one runway in operation, they have to stack incoming planes, leading to longer waits on the tarmac.