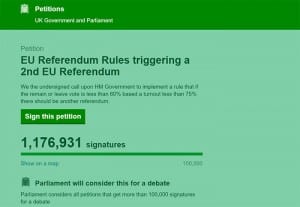 A PETITION in the UK calling for a second EU referendum has garnered more than one million signatures.

It comes after results show a bitter divide among young and old voters and between London and Scotland and Northern England.

It is calling for a new rule to be implemented stating that polls with a majority under 60% and a turnout of less than 75% must be re-started.

The petition started by William Oliver Healey, reads:  “We the undersigned call upon HM Government to implement a rule that if the Remain or Leave vote is less than 60 per cent based a turnout less than 75 per cent there should be another referendum.”

It passed the million mark  on Saturday morning, with votes most concentrated in London, Brighton, Oxford, Cambridge and Manchester.