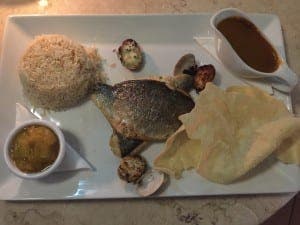 YOU sit by the waterfront in one of the genuine secret spots on the Costa del Sol.

An institution, that was for decades run by a confused costa Queen, today Alberts is the stand out restaurant in the port of Cabopino.

Just a stone’s throw from some of the coast’s best beaches, the port, which sits on the boundary of Marbella and Mijas, is only really known to expats and locals.

And they flock to Alberts for its attention to details, excellent service and mixed and varied menu, that has a distinct modern British flavour, with a pinch of Asiatic and Spanish for seasoning. 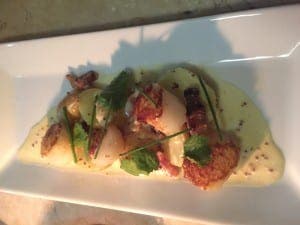 This is exemplified by the Scotch egg starter that comes with apple and sage and a green bean salad, as well as the Crispy baby back ribs in a sticky sweet chili and plum glaze, not to mention the ‘retro special’ pudding of Sherry Trifle and Eton Mess.

Overseen by Gordon Ramsey-trained Lawrence Otterburn, who runs the dozen or so restaurants of the coast’s Metro Group (Jacks, Metro, Cibo, Mumtaz, etc), you can be assured that quality is paramount.

“Ultimately we try not to be too clever as we have loads of long-term loyal customers that we have to keep happy,” he explains. “So things have to change little by little.”

His head chef Jason Coupe cut his teeth at Michelin-starred 1 Lombard Street in London, and also brings in plenty of his own style and panache.

And then there is maitre d Oliver, from Paris (although you’d never guess), who holds the team together with aplomb. 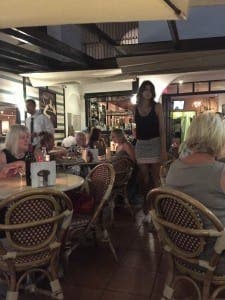 The pick of the starters was definitely the mussels, which came steamed in Pinot Grigio and with shallots, cherry tomatoes, basil and parsley. A lovely looking dish, they definitely got better and better as they continued to cook in their own sauce at the table.

For mains we avoided burgers, steaks and pizzas, and went for the Goan fish curry, which is a clever ‘deconstructed’ dish with all its constituent parts – sea bream, rice, curry sauce and mango chutney – laid out separately on the plate. Oh and with these original ‘coconut clams’, which most definitely deserve a mention.

Ambience-wise, there is a distinct Caribbean feel about the place, although the bold run of pretty hydraulic tiles give it a Spanish touch. There is a grand piano and even a penny farthing installed at the back.

In terms of wine, the list is a little short, but includes Taittinger champagne by the glass, as well as a fantastic New Zealand white, Lawson’s Dry Hills, and a decent Saint Emilion. Condado de Haza from Ribera del Duero is a good pick at 28.50 euros.